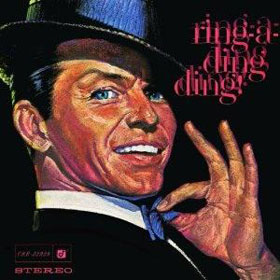 Sinatra earned the right to introduce himself in such a manner on this 1961 LP. His chart-topping recordings had helped put Capitol Records on the map, and Ring-A-Ding-Ding capitalized on his long run of success by being the inaugural release on Reprise, Sinatra’s own label. It’s worth recalling that while custom/vanity/boutique record labels would become relatively commonplace in later years (see also: Apple, Paisley Park, Bizarre/Straight), at the dawn of the 1960s such an occurrence was all but without precedent.

But the Chairman earned it. And on his home label debut, he kicked things off in style. The record features arrangements by Johnny Mandel and sources compositions from the best on offer. Like all of the dozen sides on Ring-A-Ding-Ding, the title track serves up all of the qualities fans across the globe had come to expect: dynamic instrumentation with clever, winking flourishes, top-notch songwriting and effective delivery from Sinatra that – nearly always – claims the song as the singer’s own, no matter whose name is on the writer credit.

Those writers credits read like a who’s-who of the American Songbook, and of the best adult pop had to offer in the era. Harold Arlen, Irving Berlin, the Gershwins, and Cole Porter all got the nod for tunes on this set.

The songs are masterpieces in miniature: each tune packs all of the aforementioned features into a tidy two or three minutes (only “In the Still of the Night” breaks the three-minute mark). Within those strict confines, the songs are fully developed; each starts, builds and finishes with nary a misplaced note. “Be Careful, It’s My Heart” builds and builds, and if you’ve heard this sort of music, you know how it will end. But these songs aren’t mimicking a style: they’re developing it, and each is an exemplar of the genre.

Sinatra is typically at the top of his game. Few singers in any style have been in possession of such an innate sense of what a song needs. Frank Sinatra had a preternatural understanding of when to ebb vocally, when to flow. Adept in a shocking spectrum of styles, he’s as at home singing “A Fine Romance” – redeeming its admittedly spotty lyrics with swinging delivery – as he is with the south-of-the-border romp “The Coffee Song.” (The latter’s clever lyrics more than make up for any deficiency in the former, anyway: “The politician’s daughter / was accused of drinking water / and was fined a great big fifty dollar bill / They’ve got an awful lot of coffee in Brazil.” What’s not to love?)

“In the Still of the Night” serves up a romantic, cinematic arrangement; give a close listen to the bass line, and for that matter all of the instrumentation. Mere mortal singers would be cowed by the finesse and power of the band, but Sinatra is out front as ever. There was a reason they called him the Chairman. When he steps away from the mic, the band kicks it out in supreme style. The music is so damn good on Ring-A-Ding-Ding, the album would earn five stars as an instrumental record. With Frank out front, it’s a six (or seven) out of five.

It’s not all swagger on Ring-A-Ding-Ding. Subtlety and romance are the order of the day as “You and the Night and the Music” opens. Frank starts out quietly, and once again the song unfolds; two-plus minutes later it’s swinging hard into the finish. Some luscious vibraphone frames “I’ve Got My Love to Keep Me Warm,” which also features a lovely Irving Berlin melody and lyric. In its final phrase, Frank — for the first time – seems like he might actually be breaking a sweat. Any other singer would already be passed out on the studio floor.

A pair of bonus tracks have been appended to the 2011 Concord reissue. In the new liner notes, Frank Sinatra Jr. explains that “Zing! Went the Strings of My Heart” was planned to be on the original album, but that the tapes went missing. Its retrieval is a welcome occurrence; the song fits the album like a glove. A bit of studio chatter on the front end is fun, too.

On paper, ten minutes of a Sinatra tune might seem excessive. As Frank Jr. explains, “Have You Met Miss Jones” was “deemed improper for a swing album” and was left off. In fact Frank Sr. is heard speaking over the band, observing that “it sounds like a different album.” The track displays a series of breakdowns with studio chatter and off-the-cuff singing from Frank; for anyone interested in what the sessions for these songs – essentially cut live in the studio – were like, it’s an essential listen. The recording shows in Sinatra a man who was so much more than a vocalist: he’s in complete command of the proceedings, catching the slightest perceived imperfection. Though it should be noted that it is a bonus track; if one were to set their CD player on random, the track wouldn’t show up at the end, and it would be jarring.

The Concord 2011 reissue of Frank Sinatra’s Ring-A-Ding-Ding is three steps beyond essential.

Lots more of my Frank Sinatra reissue reviews are here.