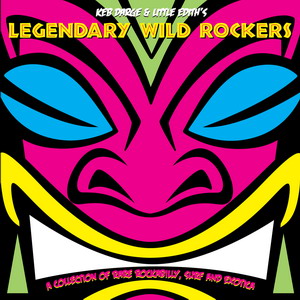 Keb Darge is someone you can count on to unearth some interesting music. He rifles through dusty stacks of records so you don’t have to. He’s brought his archivist’s sensibility to a dizzying list of compilations. Darge has put together many collections of deep funk, northern soul and more. At this point he does believe that both of those genres have pretty well been mined, so he’s moved onto other regions. His Legendary Rockin’ R&B more or less marked the end of his exploration of those genres on record, but there’s enough overlaps in the definitions of various musical genres and subgenres that the transition to his latest comp is a smooth one.

Legendary Wild Rockers delivers what its title promises. Think of it as sort of an obscurities companion to the Rhino box set Loud, Fast & Out of Control. At twenty tracks, it’s a bit short, but the quality of the material more than makes up for its brevity. Few listeners will recognize any of the artists this go-round. Be honest: have you really heard of Mel Dorsey with Chuck Wayne and the Heart Beats? No, I didn’t think so.

Back in the days when these songs were cut, it was common practice to, shall we say, borrow elements of other songs to create “new” ones. How else to explain a track by the cumbersomely-monikered Brother Zee and the Decades with the Mike Metko Combo, a song called “Sha-boom Bang.” It includes a curious little lyric that goes thusly: “Oom-papa mow mow, everybody’s heard about the bird.”  Yeah, no, really.

The set’s subtitle – gotta have a subtitle, right? – is “A collection of rare rockabilly, surf and exotica.” It delivers on those fronts, but the listener must bring an open mind. Tom-rolls and reverbed guitars do indeed often make a song surf-rock – witness “I Want Some of That” by Kai-Ray – but finding the exotica is a little iffier. When this listener thinks of exotica, he’s looking for something toward the Martin Denny end of the spectrum.

Well, the titles and lyrics of many of these songs are certainly, er, exotic. A sampling: “Don’t Call Me Flyface.” Another: “The Goo Goo Muck.” That one sounds like Kim Fowley meets the 50s. But from start to finish, Legendary Wild Rockers is a rocking good time, with nonstop nuttiness and a party atmosphere like no other. Here’s hoping Keb Darge continues his search through those stacks of old vinyl.