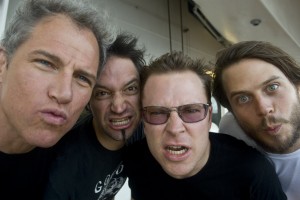 First, the bad news. I was scheduled to attend a recent local show featuring Garage a Trois. The hard-to-describe band’s sound is a heady mix of jazz, punk, rock and avant-garde/progressive sounds. I was looking forward to the show, but in the end my schedule didn’t permit me to attend the performance.

The good news is that Garage a Trois falls into that category of what is known as “taper friendly bands.” As luck would have it, the show at Pisgah Brewing as recorded by a fan; that recording was done with professional equipment, and is what tapers call a “matrix recording.” What that means, simply put, is that the recording combines multiple sources to create a well-rounded finished product. In this case the matrix was made from a careful, post-show combination of a soundboard recording and an ambient live recording. The result is super-clear and perfectly mixed, yet free of the sterility that plain old soundboard recordings can sometimes provide.

Having a well-played copy of the band’s latest album Always Be Happy But Stay Evil, I had some idea of what to expect. But live, the band is more powerful, more multidimensional. Marco Benevento’s keyboards sometimes turn out relatively conventional organ sounds, but just as often he’s getting a sound that makes you look around, asking, “Where’s that guitar I hear?” There is none to be found.

Skerik’s tenor saxophone veers too, between melodic runs and bursts of free-jazz honking. Stanton Moore is credited on the CD sleeve with “drum pummeling,” and that description sums up what he does quite well. Moore slams the skins with finesse, precision and power; inventive stuff.

While all of those guys create something quite amazing, what – for me – pushes Garage a Trois over the top is Mike Dillon’s vibraphone work. Now, vibes are not an instrument in common use in the rock idiom. Dillon’s deft command of the instrument is rooted in some tradition, yes, but mostly he plays the hell out of it, quite often accompanied by thick sheets of distortion. 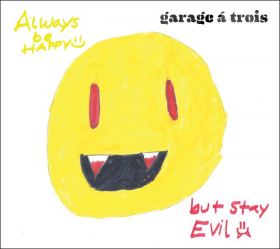 The Pisgah show was billed as a record release part for the new disc, and the two-hour show featured more than half of the tracks from Always Be Happy But Stay Evil. The remainder of the set was drawn from their three earlier albums. While the first two of those discs featured the angular fretwork of Charlie Hunter (no longer with the band, he was in fact onstage at Pisgah the night before this show), the current quartet ably handles the songs without him. They’re a trilling, descending solo line midway through the night’s live rendition of “Resentment Incubator” that sounds head-spinningly like a guitar; a few bars later Benevento is soloing with slightly tweaked tone color and attack, and at this point it sounds like more traditional overdriven B3.

There are hints of Zappa (especially the late 70s/early 80s version) in the group’s work, but in general they’re a bit more accessible and straightforward than that. And while Garage a Trois does attract herbulent, noodle-dancing fans of the jam band variety, in general their songs as performed live don’t go off on exploration/extrapolations; they don’t stray mindlessly from the studio arrangements. Though they do offer enough variation – building smartly on the basic arrangements — to make a live show well worth attending.

A few left-field covers were included in the Pisgah set, making it clear that Garage a Trois aren’t narrow-minded jazzbos. John Carpenter’s “Assault on Precinct 13” closes the album, but this night the band wheeled it out mid-set. A cover of the Stooges’ “1969” is a bit less expected; with all their sax skronk, one might have more expected something off Fun House. Ween’s “It’s Gonna Be a Long Night” serves as the rocking chair for this three-song mini-set of covers.

A Garage a Trois show serves up enough funk to keep the dancers happy, enough exploratory playing to amaze  the more serious musos, and enough energy to excite the rock crowd. In short, they offered up something for nearly everyone. Few bands make the case – simply by existing — for throwing genre classifications out the window as well as do Garage a Trois. Next time they’re in town, I won’t miss them.