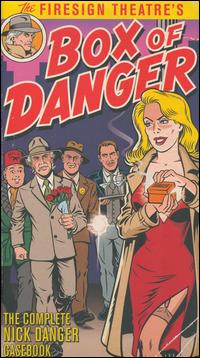 The conventional wisdom about The Who back in the 1970s–and this line of thinking was explicitly reinforced by no less than Pete Townshend himself–was that while the studio LPs were splendid, they simply couldn’t capture the energy of The Who onstage. Whether one accepts this argument, there’s a valid point to be appreciated: what The Who did onstage was certainly different than the approach they took on record. The live shows were tours de force of high-energy rock, with all of its celebratory and angsty underpinnings. The studio albums were another affair. They were deep; the power was certainly there, but in a more controlled manner.

Onstage, The Who gave off the unmistakable vibe that they could go off the rails, out of control, at any moment. In fact they occasionally did: Pete and Roger might get into onstage fisticuffs, or Keith Moon might pass out onstage, leaving the group to solicit a replacement drummer from the audience (yeah, this really happened: November 20, 1973 at San Francisco’s Cow Palace).

The live shows were meant to be experienced then and there; the albums were designed for repeated listenings. (As a hardcore aficionado of bootlegs, I don’t completely subscribe to this approach, but bear with me while I try to connect the dots.)

Firesign Theatre put out an impressive canon of comedy albums (using that term quite loosely; their material transcends comedy) during the group’s ’68-’75 heyday. From their underrated debut Waiting for the Electrician or Someone Like Him through In the Next World You’re On Your Own, they served up their unique brand of mischief, drawing from disparate elements that included James Joyce, W.C. Fields, commercial consumer culture and hippie/counterculture tropes. Their albums feature multilayered works that stood up to repeated spins (often, no doubt those took place in sweet-smelling, smoke-filled dorm rooms). Oftentimes a joke would start in the middle of an album, and then disappear up its own sleeve in mid-punchline, only to reappear halfway through a subsequent album, buried in the dense mix. Heady stuff. Firesign Theatre’s approach was in some ways akin to the Zuckers‘ early strategy in films like Airplane! and Kentucky Fried Movie: keep throwing jokes at the audience. If they don’t like this one, they’ll like the next one. The difference being that FST’s material wasn’t laugh-out-loud; it was more of the “hmmm…” or “wow, man” variety. It was cerebral, thought-provoking stuff that drew connections where you thought none existed. 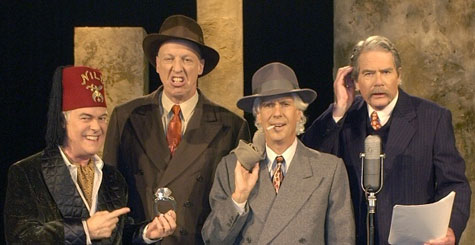 One of the most enduring characters the group created was Nick Danger. A parody of the hard-boiled private gumshoe of the radio era, Danger and his memorable cohorts and enemies (Lt. Bradshaw, Rocky Rococo and others) engaged in rapid-fire wordplay. Listen and you’ll catch one joke, then miss the next three while you’re chewing on it. Nick Danger first appeared on the group’s second outing, the classic How Can You Be in Two Places When You’re Nowhere At All (1969). He surfaced again as a highlight of a noisy, lesser work Not Insane or Anything You Want To (1972), but that was pretty much it for the detective during the Firesign Theatre’s peak period.

But part of these one-time hippies’ ethos is recycling, so the Nick Danger character — like the group itself — never really went away. He reappeared onstage and on some smaller-label projects throughout the 70s, into the 80s and beyond to present day. All of his performances have been lovingly collected in an impressive 4CD box set from Shout! Factory. The aptly-named Box of Danger (with ace cover art from Steve Vance) bills itself as “The Complete Nick Danger Casebook,” and, well, it is. This is highly entertaining stuff.

But back, finally, to the Who parallel. The studio pieces — most specifically, the debut and “The Case of the Missing Shoe” from the eponymous 1979 EP released on the then-fledgling Rhino label — are deeply textured pieces that take the piss out of most of our entertainment conventions. They hold up well under repeated listens. The live stuff, by contrast, has the electricity of as-it-happens interplay among the players; it benefits from the audience feedback of laughs and gasps. The borderline-improvisatory nature of the material adds to the excitement, but makes it hit-or-miss. And by definition, since it’s live, it lacks the depth of the studio material.

Luckily, quantities of live and studio tracks are well-balanced on Box of Danger. As are well-known and rare material: the lions’ share of content on this set is heretofore unreleased (or previously broadcast but once). So for fans of Rocky Rococo (“at your cervix!”) and Betty Jo Bialosky (whom “everyone knew…as Nancy”), there’s a treasure trove of material here. And you can pick your poison: depending on your mood, you can opt for a studio outing like Disc 3’s “Three Faces of Al,” or enjoy a more recent broadcast from 2002 or 2005.

So take a tip from a Kopp who does: buy it now, and tell ’em necessity sent ya.