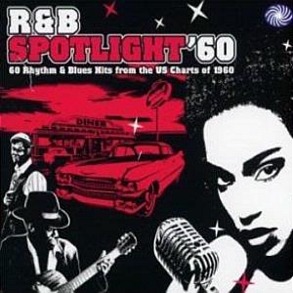 Nineteen-sixty might not be the first year that comes to mind when you think of compelling music making the charts. But a new collection from the estimable folks at UK-based label Fantastic Voyage might lead you to give a more careful listen to music from that era. R&B Spotlight ’60 is a jam-packed 2cd collection of – as the set’s subtitle puts it – “60 Rhythm & Blues Hits from the US Charts of 1960.”

To start with, it’s simply good value for the money. Sixty songs is a lot of music. And while fans of pop, soul and R&B will recognize many of the artists featured within, some of the actual songs might not seem familiar. Here’s a partial list of the acts on R&B Spotlight ’60: Hank Ballard and the Midnighters, Johnny Otis, Elmore James, Fats Domino, The Hollywood Argyles, Aaron Neville and Chuck Berry. Simply put, this collection casts a pretty wide stylistic net. Fact is, all of those artists charted (on the R&B charts; less frequently on the pop charts) in 1960.

What’s interesting is the number of songs on this set that were made famous (or successfully revived) by other, later artists. Jessie Hill’s “Ooh Poo Pah Doo” and “Big Boy Pete” were both staples of Paul Revere and the Raiders’ live set in the first half of the 60s. Bo Diddley’s “Road Runner” was recorded by a long list of UK acts. Paul McCartney covered Lavern Baker’s “Shake a Hand” on his 1999 Run Devil Run album. Jimmy Jones’ “Handy Man” was drastically rearranged for a hit version by James Taylor (of all people). And speaking of the softer side of 70s artists, who can forget Jackson Browne’s live cover of Maurice Williams and the Zodiacs’ “Stay”? (I’m trying.) And a young quartet from the north of England cut a demo of “Besame Mucho” (done here by The Coasters) in hopes of scoring a record deal with Decca in 1962. (The quartet’s manager Brian Epstein was famously told by Decca’s A&R man Dick Rowe that “guitar groups are on the way out.”)

As typical of the era, there are a few nutty, near-novelty type songs on the collection. The Coasters’ “What About Us” is a lot of fun, though. The songs cover a lot of styles, and are here in good, consistent sound quality. If you’re a rock fan, these songs might not be in your collection. But they form an important part of the back story, seeing as they exerted a great deal of influence – in terms of performance, style, delivery and subject matter – upon later acts. As musical history, R&B Spotlight ’60 is a good overview. As plain old entertainment, it works nearly as well. Recommended.