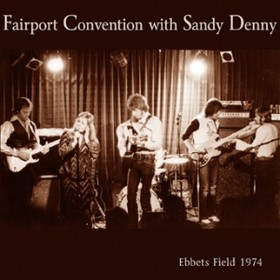 First, a few words about what this isn’t: While it’s Fairport Convention, it not the earliest lineup featuring Richard Thompson; it’s a later aggregation of the band, but most of the key players remain. It’s also not recorded at a legendary baseball park in Brooklyn; Ebbets Field was the name of a popular Denver music venue of the 1970s. A number of radio broadcasts took place at the club. Only a few of these have made it to official release, though dozens circulate among collectors of unofficial material. Some of the artists who were captured live onstage (sound and recording courtesy of the Listen Up Company) include Caravan, Ry Cooder, Flo and Eddie, Peter Frampton, Bob Seger, Kraftwerk, Moby Grape, Terry Reid, Muddy Waters, Minnie Riperton, Sugarloaf and Tom Waits. An eclectic bunch.

Fairport Convention appeared for at least three sets between May 23 and 24, 1974; all were recorded. The second and third sets have long circulated on the underground circuit. The people at It’s About Music got ahold of what IAM President (and liner notes writer) Dean Sciarra describes as “this little DAT tape of the band.” While he characterizes the source tape’s sound as “pretty bad,” Fairport Convention’s lead guitarist Jerry Donahue took a crack at cleaning it up.

The tape’s history aside, it’s a fine listen, and well worth official release. The six-piece group takes the small in-house audience (it sounds like under fifty people were there) through a good cross-section of the band’s catalog. That peculiar animal that is English folk-rock is, of course, the order of the day. Not a bit like its American counterpart, British folk-rock is closer to Traffic, with plenty of that regal, slightly mannered medieval vibe. Smartly strummed amplified acoustic guitars are led by manic fiddle playing from Dave Swarbrick on tracks like “Fiddlestix.” That tune puts Charlie Daniels and his ilk to some serious shame.

In addition to Fairport classics like an epic version of “Sloth” – one of the best things here, and for that matter, in the whole of Fairport’s deep catalog – the group delivers a trio of traditional songs familiar to anyone who’s a fan of the band. The tracks will also be known by anyone who’s spent any time on the coffee house circuit. That said, “Dirty Linen,” “Matty Groves” and a medley of traditional tunes are all delivered with aplomb. Rarely is a listener treated to an evening of music that (a) isn’t rock and yet (b) still rocks. This stuff does. Even for those music fans who don’t especially dig sawing fiddles, clap-your-hands-and-stomp-your-feet style stuff, or earnest female vocals from the redoubtable Sandy Denny, this set is near essential. Especially on “Who Knows Where the Time Goes,” Denny’s voice is in fine, heartbreakingly plaintive form. For you few rocker types who need a bit of extra convincing, that’s Denny joining Robert Plant on the vocals for Led Zeppelin’s “The Battle of Evermore.”

The new CD is complied from the sets recorded in late May; presumably enough material exists to put together another disc in the future. (And there’s also a Sandy Denny solo set from Ebbets Field recorded a year earlier).