Album Review: The Residents – Not Available 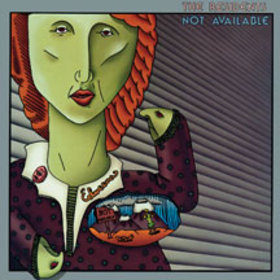 Leave it to the folks at MVD Audio to mount a reissue of an album that (a) as legend has it wasn’t supposed to have even been released the first time; (b) didn’t shift in any sort of huge quantities on initial release and (c) is an exceedingly difficult listen.

I sometimes joke that I keep Residents albums handy to help hasten overstaying guests on their merry way; short of Throbbing Gristle and Mrs. (Elva) Miller, few artists are as off-putting to the casual listener as the mysterious foursome (or howevermany-some) from Louisiana (or wherever).

There’s a whole mythos built up around The Residents, and their theory of obscurity is a central component of it. Their wryly-titled album Not Available dates from the early-ish part of their  work, and saw official release on Ralph Records in 1978 (it was recorded some years earlier). A disc that defines difficult, it remains enjoyable on a number of levels. Lyrically as dark as they’d ever get – though later-period discs such as Tweedles and Freak Show would push things even further toward the lyrically transgressive – Not Available includes long segments of instrumental music. Sort of a malevolent rethinking of Brian Eno’s Another Green World, Not Available depicts a world that’s unremittingly grotesque. But like an aural equivalent of a traffic accident, you can’t turn away.

“Edweena” opens with some classical instrumentation – oboes, maybe – and a doomy rhythm. Three minutes in, bizarre and intentionally off-kilter vocal harmonies start to tell the story. There’s almost always a story on a Residents record. As per usual, the Not Available story is distasteful, shocking and generally unpleasant. It’s also relatively (relatively, I say) easily ignored; listeners who are open to the sonic trickery of Residents music can (if they wish) consider the vocals yet another instrument.

Since nobody really knows who is in The Residents, the issue of guest appearances isn’t easily addressed. A female singer is present, portraying the part of Edweena in the operetta that was Not Available. The entire affair does have a showy, stagy feel, but of course it’s warped almost beyond comprehension by The Residents. Plans were in fact underway for actual performances of the story, and the 2011 reissue includes photos from rehearsals. As one might expect, the photos are themselves a bit disturbing. Not for the kiddies, to be sure.

The Residents have never allowed themselves to be constrained by normal rules of melody or arrangement. A casual listen might lead one to decide it’s all noise, but nothing could be less accurate than that assumption. “The Making of a Soul” — the second of four long tracks that comprise the bulk of the record – is built around a squawking saxophone riff, joined by creepy chanted vocals. A lovely piano part quickly falls apart into something more sinister, showcasing a common Residents approach: draw the listener in with something relatively accessible, and then once they’re hooked, hit ‘em over the head with something deeply weird. The piano and string arrangement of the track’s midsection is joined by an affected spoken vocal. What the lyric “Welcome to the offshoots of Jupiter” might possibly mean is left to the listener to decipher. Or not.

Acoustic piano, synthesizer strings and some dissonant flute-like instruments kick off “Ship’s A’going Down,” the strangest and least-accessible track on Not Available. The Enigmatic Foe character appears, and the Residents equivalent of a Greek chorus adds commentary. By the middle of the track, several tunes — all dissonant — seem to be playing at once. And while The Residents rarely sound even a little bit like anyone else, in places this tracks is reminiscent of Mike Oldfield’s Tubular Bells. The synthesizer work toward the track’s end is interesting, almost subtle.

The first half of “Part Four: Never Known Questions” is The Residents at their most musical; there’s almost a rock beat to the song. In some ways the track points toward the relatively tuneful approach the group would employ on The River of Crime some thirty years later. But the groaning recitation that makes up the track’s second half is, well, not exactly ear candy. A short “Epilogue” reprises some of the musical themes from throughout the piece; think of it as an overture, or maybe even “Residents on 45” if you’re in a perverse mood. A child’s voice adds yet another unsettling layer to the whole affair.

Not among the most accessible of the releases from this notoriously difficult outfit, Not Available remains a rewarding if wholly challenging listen for the adventurous. Or you could play it to get your mother-in-law to go home. Of course I’ve never met your spouse’s mom, but I feel certain it would work on that level. If it doesn’t, well, then I suspect you have problems of another sort.