Home  »  interview   »   To the Lifeboats with Thomas Dolby, Part Two

To the Lifeboats with Thomas Dolby, Part Two

The economics of touring the USA are – as for any musician based in the UK — daunting for Dolby. “I would love to tour in the late summer or the fall,” he says. “I’d have to figure out how to do it economically; I haven’t got a full-time band. Because of the range of music on this album, I don’t think it would be appropriate to do it solo with a rig of rack gear the way I did on my Sole Inhabitant tour. It needs real musicians. But the cost of rehearsing and then taking out four or five musicians is very high. And after a brief renaissance the last few years, the live touring business is definitely going through some hard times at the moment; it’s going through quite a recession.” 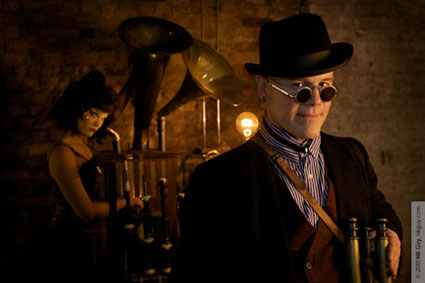 One option might be what Dolby describes as “ponying up with a similar act, doing a double bill and sharing some of the costs.” He laughs that “every week I get an offer to go off and do some eighties revival tour with ABC and A Flock of Seagulls. With all due respect, I wouldn’t touch something like that with a ten foot pole. It would be an admission of ‘All my glory days are behind me; if you want to get a few drinks in you and take a walk down Memory Lane, come to our show.’”

“All of my favorite artists transcend the era that they’re from,” Dolby observes. “You don’t really think of Kraftwerk or Van Morrison as really having a decade associated with them. I’d much rather be in that category, and I’m very proud of my new stuff. I’m not a twenty-three year old pinup these days, but I think artistically Oceanea is as good as anything I’ve ever done.”

While Dolby has been very busy with a lot of different things for the last decade — ringtone development in Silicon Valley, serving as Musical Director for the groundbreaking TED Conference – he hasn’t kept a high profile in the pop music world. His new online game The Floating City is (among its other virtues) part of a strategy to increase his profile. “It’s a creative enterprise in and of itself,” he says, “and I’ve really enjoyed building it. During those years when I was not making music, the internet came to be. And [online] groups came about on a daily basis, interpreting my lyrics, analyzing my chord sequences, and making tribute cover versions. Kind of like [I was] a dead guy who’d gone away,” he chuckles. 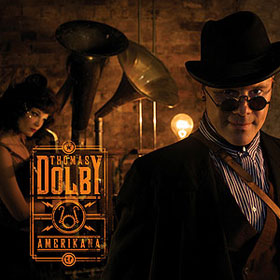 “It was all very amusing,” Dolby continues. “But one of the things that developed was a form of fan fiction. People would take on the names of characters from the songs. And they would write a sort of fantasy collaborative fiction, extending some of the mythology that was in the songs. I thought that was really interesting; there are a lot of cross references in the songs, and people tied together loose ends.”

“I’ve done four solo albums spread over thirty years, which is pretty sparse,” Dolby admits. “I was talking to Peter Gabriel the other day, and I told him, ‘I’m slow even by your standards!’ But there is a continuity that runs through the whole body of work. And the game that I’m building takes all of that – the characters, the place names, the mythology – and creates an alternative reality world around them. There’s a bit of a mystery, and there’s a back story that you have to discover collaboratively through exploration and problem-solving.” There’s a significant prize for the winning team. Dolby says, “I’ll do a private concert for them, at which I’ll perform the new album A Map of the Floating City in full.”

“So it’s an artistic endeavor that I take very seriously,” Dolby asserts. “On the flip side, it’s also designed as a marketing campaign. Among hardcore fans, they keep current and tend to snap up whatever I’ve done. But there’s a much larger group – maybe ten times that size – who have heard of me. Maybe they have an old record of mine in their collection, or have seen videos of mine on MTV. And the goal, really, is to convert the second group into the first group. I’m hoping that a lot of people who are not already committed fans will be attracted to the game, and that during the course of the game, they’ll fall in love with the music.”

That marketing model is akin to game-as-gateway-drug. “’Drug’ is an accurate word in some ways,” Dolby concedes. “Though some in the music industry fail to understand, I think we are drug dealers. Because until people fall in love with their music, there is no market there. There are very few people who buy stuff sight unseen. Instead, the earworm gets in their brain with a piece of music, and they’ve got to have it. That’s what a hit is, really. And that hasn’t really changed, regardless of changes in technology.”