Home  »  interview   »   To the Lifeboats with Thomas Dolby, Part One

To the Lifeboats with Thomas Dolby, Part One

To many music fans, Thomas Dolby is best known as the guy with the popular early-80s MTV hit “She Blinded Me With Science.” But Dolby’s career has taken many other interesting twists and turns since then, including an extended hiatus from the music scene; that break actually found him busier than ever. He’s now at work on an ambitious new album, A Map of the Floating City, due out later this year. Related to that project are a pair of EPs and an online game. 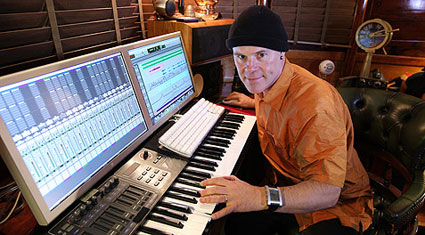 One might consider the three-song EP Oceanea something of a teaser for Dolby’s upcoming full-length, but he argues that’s not the case: “It’s very much designed to stand on its own,” Dolby asserts. “The [upcoming] album has three continents, and each one of them has a very different flavor. So the Amerikana and Oceanea EPs are representative of those segments of the album. Hopefully the whole thing hangs together as a single piece, but there is very clearly a different atmosphere to each section.”

The opening section of the EP’s title track employs vocal processing that is reminiscent of the popular Autotune effect. Dolby chose that texture because he believes it “makes the vocal very vulnerable. The emotional content of the lyrics is very powerful. So to hear the vocals contained like that seemed like a juxtaposition that was very interesting.”

For an artist whose early works are often pegged as electronic sounding, Dolby’s Oceanea is relatively non-electronic in its approach. “I think it’ll be seen that way,” Dolby muses. “It’s interesting, the tricks history plays.  I’ve had a few comments from people; somebody posted on my YouTube video today, ‘Thomas Dolby playing real instruments! What’s the world coming to?’ And I thought that was interesting for a number of reasons. Even going back to my first album [1982’s The Golden Age of Wireless], there were songs on there that were completely done with synths and drum machines. But there were also ballads like “Weightless,’ for example, which is a three-piece band with me on piano. Barely a synth in sight. And the whole The Flat Earth album is very organic; it’s got things like ‘I Scare Myself,’ which has got an almost lounge-y jazz feel. So I’ve always had this more atmospheric side, which I view as being very organic.”

“Like everybody else,” Dolby continues, “with a range of production techniques available to you, you try and use the best of all worlds. But to me the distinction is that music that gets the label ‘electronic’ likes machines to sound like machines. It has a fondness for the quirks of a machine playing music versus a human playing. And in most cases — even when I’m using electronics – I’ve always used them in an electronic way.” 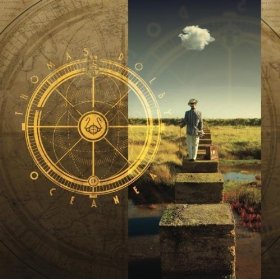 “There are certainly exceptions,” he admits. “’She Blinded Me With Science’ is almost a lampoon of that sort of approach. But that was almost a one-off. In a lot of cases I don’t think I am very electronic. And I think that on Oceanea, you’d almost have a hard time picking out the electronics in there. The song ‘Simone’ has a Theremin, and things like that, but they’re fairly few and far between.” (Speaking of Theremins, the instrument used on “Simone” is a rare vintage RCA model belonging to Bruce Wooley; Dolby notes that it’s one of few with a built-in speaker.)

Dolby explains that the Latin musical flavor of “Simone” serves the song’s story, one of “a woman escaping her rather grim Ohio situation. And we assume a partner who is not sympathetic. It’s a bit like the film Shirley Valentine; a bored housewife leaves her husband and goes off. But in this case it turns out to be bittersweet: she gets there and has the drink with the umbrella in it, and the samba music’s playing, and the waves are crashing on the beach. Suddenly she says, ‘My god, what have I done?’”

“I love to use musical idioms like that to illustrate parts of a story,” Dolby says. “In ‘To the Lifeboats,’ you’ve got two acoustic guitars, and organ and some congas playing the verses. Then it gets to the end of the second verse — ‘There are no fuckin’ lifeboats’ – and suddenly a full-on grunge band comes in. The lyrics go, ‘There’s a freak storm blowing in,’ and there’s these massed Def Leppard-type backing vocals. Then it blows over; it’s like a squall at sea. You return to calm, but a sense of uncertainty and resignation remains.” He adds with a hearty laugh, “It would be very challenging in a live setting. You’d need a serious stomp-box. But we’ll figure out a way to do it, I expect.”

“To the Lifeboats” has a heartbreaking atmosphere, but Dolby says that the finished song developed over time. “When I came up with the verse, I didn’t have any lyrics for it. I sent a very rough version of it to Paddy McAloon [Prefab Sprout] because I was thinking about seeing if he wanted to co-write it with me. He wrote back to me, ‘I don’t know; nothing springs out at me. It doesn’t have a bridge, does it? It’s just the same melody going ‘round and round.’” Dolby chuckles good-naturedly. “I thought, ‘Screw you, Paddy!’”