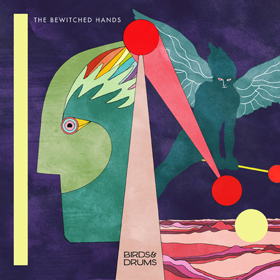 The idea of a songwriters’ collective has always fascinated me. Band dynamics being what they are, most groups have only one songwriter; the alternative is prone to the “too many cooks” scenario. Aggregations that have great potential (on paper at least) often flame out due to clashes of egos, or a general imbalance of creativity. The Grays are a good example of this.

Moreover, most groups would be happy to have even one decent songwriter (or singer, for that matter). Having more than one almost seems greedy. So when a group comes along that seems to make the songwriting collective concept work, I sit up and take notice.

The Bewitched Hands are a six-piece group from France. Their album Birds & Drums offers thirteen tracks that are varied in style and delivery, yet they hold together as a cohesive whole. “Happy With You” has a gauzy, dreamy jangling feel halfway between  Crowded House and The Polyphonic Spree. Earnest acoustic guitars give way to a Revolver-styled backwards guitar solo. And impressive dynamics keep the listener on the endge of their seat; rarely has a band done so much with what’s essentially a tow-chord song. It’s a brilliant album opener that sets the tone for what’s to come.

The title track is built atop a clip-clop rhythm; its call-and response vocal arrangement suggests a more accessible (and better-sung) rethinking of the Velvet Underground’s “After Hours.”

Heavily French-accented vocals reminiscent of (of all people) Feargal Sharkey are a centerpiece of “Underwear,” a song that weds a Kinksy “Sunny Afternoon” aesthetic to a thickly chorded powerpop vibe; like most of the songs on Birds & Drums, it features a surfeit of good musical ideas. “So Cool” (featuring the same singer; the liner notes don’t indicate who’s who, or who does what) straddles a poppy feel with a wide-eyed, manic, punky delivery.

“Cold” is a speedy tune that wouldn’t be completely out of place on a Hüsker Dü record; using an approach similar to that of Bob Mould, it yelps and pummels along yet bolts the whole affair onto a catchy pop melody. “Work” goes somewhere else entirely: its stuttering vocal line calls to mind Shelleyan Orphan or Orchestral Manoeuvres in the Dark, and its minimalist, celestial instrumentation reinforces that effect. Yet it doesn’t sound dated.

The Bewitched Hands are all over the place musically:  “Out of Myself” sounds like a campfire version of The Police. Well, if the campfire had a Hammond organ. “Kings Crown” has a bouncy, insistent rhythm that could have worked well back when MTV showed music videos. But again, though there’s a vaguely early 80s vibe to may of the songs on Birds & Drums, the record is decidedly non-retro.

Though there’s a strong pop sensibility throughout the disc, the group rocks as often as not. “2 4 Get” is a prime example of The Bewitched Hands’ propensity toward rockiness. But “Staying Around” goes as far away from that approach as possible; its smoky and vulnerable vibe is a counterpoint to the harder-edged moments on the record. And that contrast is a big part of Birds & Drums’ effectiveness as a whole. “Sahara Dream” calls to mind a stripped-down (yet still melodramatic) Phil Spector arrangement.

For listeners who like their pop clever and with some teeth, and who welcome stylistic variety, Birds & Drums is a quality example of all of those attributes.