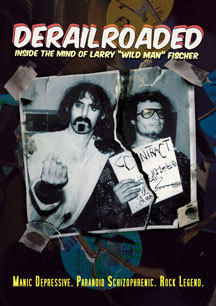 I approached this one with great trepidation. In today’s world where postmodern irony is bought and sold like any other commodity – witness the plethora of so-called “ironic” T-shirts and fedoras at many concerts – I had some concerns that Derailroaded: Inside the Mind of Larry “Wild Man” Fischer might be an exploito-fest of this troubled soul.

Luckily, my worries would prove to be unfounded. Filmmakers Josh Rubin and Jeremy Lubin (“The Ubin Twinz”) have brought a sensitive and penetrating approach to their subject. Similar in more than a few ways to You’re Gonna Miss Me, the 2005 film about another outsider (Roky Erickson), Derailroaded presents a balanced portrait of an unbalanced individual, in this case Larry “Wild Man” Fischer.

Drawing upon interviews with those closest (or as close as one can safely get) to him, the film includes interviews with Barnes & Barnes (aka Robert Haimer and Lost in Space star Bill Mumy), Frank Zappa’s widow Gail, Barry Hansen (aka Doctor Demento), “Weird” Al Yankovic and a select few others. There’s also plenty of modern-day footage (you can’t exactly call them interviews) with Larry Fischer himself, plus some scenes featuring his elder brother, aunt and cousin. Those family scenes are ultimately sad for a variety of reasons that the filmmakers make clear, but they manage to do so in a subtle, understated way.

Fischer gained his fame (notoriety might be a better word) as a street performer in late-sixties Hollywood; he’d cajole passersby to let him sing them a song for a dime. Fischer would compose a song right on the spot. His delivery might strictly be termed a cappella, but “unaccompanied” might be a more accurate way to describe it. His yelping, declamatory style was (and is) of the sort that causes most people to cross the street so as to keep a safe distance.

As the film unfolds, a number of people (musicologists, psychiatrists, DEVO’s Mark Mothersbaugh, outsider music expert Irwin Chusid) all weigh in to assert that Fischer is a true — if deeply flawed — talent. The uninitiated viewer will scan those faces for a trace of a smirk, a wink or other tic that gives away the it’s-all-a-big-fucking-joke attitude. But they’ll find none of that.

The reason is simple: Fischer really is a talent. While his vocal style is unabashedly grating, he sings (mostly) in tune, and he understands meter better than plenty of so-called musicians. His is a natural, savant style, and his minimalist lyrics are slice-of-life. Not your life or my life (thank goodness), but his. To laugh at him is to be callous, and to miss his particular talent. The story related in Derailroaded (the title is a neologism coined by Fischer) is a sad one; in large part because Fischer rarely got the help he needed to address his myriad issues (manic depression, bipolar disorders, paranoid schizophrenia, an occasional propensity toward violence, etc.). But what’s sad in its own way is what happened when he (in 2006 or so) finally did get that sort of help. See the film to learn that and more, including the story of Fischer’s duet with Rosemary Clooney. No, really.