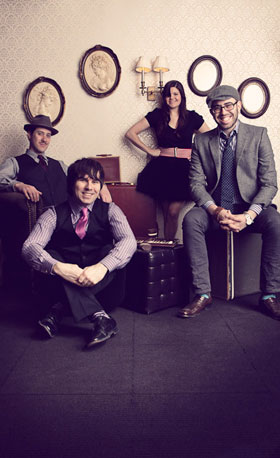 If you’ve attended even a few live shows in your lifetime, you’re probably familiar with the particular plight of the opening act. Often added to the bill by the record company, this hapless aggregation suffers the ignominy of performing before a crowd who – let’s be honest — came to see somebody else. Back in the heyday of arena rock shows, I remember that it was something of a running joke: the biggest applause line of the opener’s set was always, “This is our last number.” Poor bastards. As often as not, they would play their set with all the house lights up, as disinterested concertgoers milled about, finding their seats.

Sometimes it’s better than all that. Sometimes some actual thought is put into the idea of what act should be paired with the headliner. While nobody wants to see a lesser version of the main attraction, if a complementary style can be presented, everybody wins.

Everybody won a few nights ago at Asheville NC’s Orange Peel. The headliner was the high-energy neo-soul/r&b group Fitz & the Tantrums, and they put on a stellar, ecstatically-received show. They, in fact, had been in town not long before as an opening act themselves, warming up an Orange Peel crowd before Sharon Jones and the Dap Kings took the stage.

But on this night — the second night of the pairing — the opener was April Smith and the Great Picture Show. Having read over their press material ahead of time – but, notably, not having had a chance to listen to any of the music —  I wasn’t at all sure what I’d be hearing. To be sure there were, from my standpoint, some red flags. The press kit made note of Smith’s love of Tom Waits and old-timey music. The photos showed Smith in a frilly skirt, and the band members in suits sans jackets, giving them a decidedly vaudevillian air. Even more troubling, pictured instruments included accordion and banjo.

I need not have worried. True, when the band took the stage, they looked very much like their press photos. But from the moment they counted in their first number, it was clear that their show was no gimmicky retro shtick. The most remarkable quality of the group – and there were many remarkable qualities – was Smith’s voice. Similar in texture and tone to KT Tunstall, April Smith has one incredible set of pipes. Her voice projects right through the amplified instrumentation, and she displays amazing control and energy. She can hold a high note at full volume for a pretty long time, and she writes songs that showcase that talent.

Yes, there was accordion, played alternately by various members of the group (including drummer Nick D’Agostino!). But there was also some rocking guitar (either a Fender Jazzmaster or Mustang; I was too far away to tell for certain) from Marty O’Kane. He also switched off on keyboards. Steve Purpuri alternated between electric and standup bass, and his doing so added some warm, varied tone coloring to the songs. While Smith’s songs definitely had a showy Americana vibe to them, they also rocked. The songs were in turn wry, torchy, swinging, playful, moving and rocking. The set list – drawing mostly on numbers from the group’s Songs for a Sinking Ship — displayed what one might call a varied consistency: every song had its own identity and feel, but all worked well in context and none seemed to blur into another. When the band inserted a bit of Led Zeppelin’s “Whole Lotta Love” into the middle of another song, it actually worked.

All too often the crowd ignores the opening act. But April Smith and the Great Picture Show won this crowd over quickly; the band had the good fortune this night of a crowd that showed up early, so they played to a nearly-full room. The crowd loved it, giving each song an enthusiastic, cheering response. In the end, they will go down in my own personal history as one of the best opening acts I’ve witnessed.