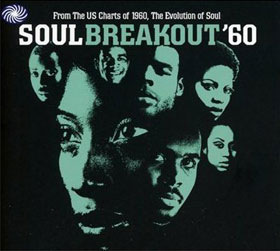 Pop music and/or rock’n’roll may – as many have argued – have been suffering from a period of insipidness at the very beginning of the 1960s. But on the soul/R&B charts, no such problem existed. Artists including Ike & Tina Turner, Ray Charles, James Brown, Sam Cooke, Jackie Wilson and Mary Wells were all turning out some fine and exciting music. Whether listeners of AM pop radio heard all of it or not, there was a thriving scene happening over on the charts, a prototype of “alternative” music long before that term existed.

The UK-based Fantastic Voyage label has collected sixty of the tracks that graced the US R&B charts in a single year on Soul Breakout ’60. (Some of the tracks did cross over to the pop charts.) Listeners whose memories don’t always retain the finer details of release dates may find themselves thinking, “That song was released in 1960? It sounds more like ’65.”  Tracks like the original version of Ike & Tina’s “A Fool in Love” and James Brown’s “I’ll Go Crazy” have a tight, upbeat and decidedly ahead-of-their-time feel. Some tracks are a bit dated, but even those are a lot of fun. As with any chart and any year, there are a number of songs and artists who appeared once, never to be heard from again. But that doesn’t make their singular contribution to the charts any less worthy. But for every Sugar Pie Desanto (“I Want to Know”) Soul Breakout ’60 offers up several Ray Charles tunes, a couple of Shirlelles numbers and so forth. These artists were busy entertaining folks and influencing other musicians who were, in 1960, still woodshedding, developing their craft. The Beatles, to name the most obvious example, heard a lot of this stuff; the girl group sound in particular had a major influence on their sound.

A couple of deeply weird tracks are included. Bobby Marchan’s “There’s Something on Your Mind (Part 2)” has to be one of the oddest (not to mention shocking and disturbing) songs to place on the charts in 1960 or any other year. Certainly the blues has long dealt with shoot-my-baby sentiments, but Marchan’s ditty somehow seems a lot more serious about the whole matter.

Most of Soul Breakout ‘60 is far more upbeat, however. Sam Cooke’s “No One (Can Ever Take Your Place)” has a folk-gospel feel. And while the majority of the tracks feature relatively bare-bones production, no survey of 1960 could be complete without a number of Phil Spector productions; Soul Breakout ’60 includes Ben E. King’s peerless “Spanish Harlem” along with several other gems.

The sound quality is good enough; it’s doubtful that studio masters were used to compile this collection, but save for an occasional low-frequency hum on a few tracks, any sonic shortcomings won’t distract from listening pleasure. With an overall vibe that’s grittier and more real than what you might expect if this set bore, say, the Time-Life Music imprint, Soul Breakout ’60 is a fine listen from start to finish.