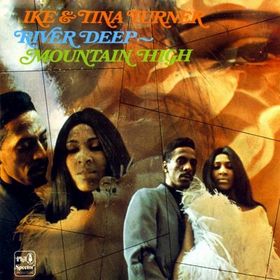 By the mid-sixties Ike and Tina had established themselves as a force to be reckoned with in soul and R&B. Their high-energy, incendiary live shows gained them a following. Their singles – including “A Fool in Love” (1960) and 1961’s “It’s Gonna Work Out Fine” stormed up the R&B charts, and (to a lesser extent) the Billboard Hot 100.

Of course Spector had made quite a name for himself in those years, too. His singular “Wall of Sound” production technique had delivered massive hits for the Crystals, Chiffons, Ronettes and others; Spector’s production hand was so distinctive that – then as now – regardless of the nominal artist on a particular record, the songs would be thought of as Phil Spector singles.

Spector was arguably the first “celebrity” producer. His notoriously erratic personality has always been part and parcel of his work, and in light of his, um, 21st century legal troubles (okay, let’s not mince words: murder conviction, currently on appeal) has tended to overshadow his many achievements as a producer, arranger, composer and musician.

Ike Turner would have his share of bad publicity as well. After he and Tina divorced, Tina’s book I, Tina (subsequently adapted as the hit film What’s Love Got to Do With It) painted a decidedly unsavory portrait of Ike as an abusive, drug-addled fiend. Be that as it may, those facts should not take away from Turner’s musical contributions: the song often credited as the first rock’n’roll record – Jackie Brenston’s 1951 “Rocket 88” was really Ike and band fronted by vocalist Brenston. While a lesser light than the greatest giants of rock’n’roll music, Turner still deserves mention in any discussion of rock’s history along with Elvis, Chuck Berry, Roy Orbison, Bill Haley, Jerry Lee Lewis, Johnny Cash, Carl Perkins, etc.

The pairing of Spector with Ike and Tina might seem odd, then: after all, Ike was a band leader who knew – and usually got — what he wanted from his players. And Spector’s musical vision – for all its strengths — always threatened to drown out the individual personality of the artist; only a handful (then-wife Ronnie, the Righteous Brothers) could transcend his undeniably heavy-handed production. In Spector’s world, the artists were merely one of the (often incidental) instruments in his creations.

River Deep, Mountain High represented Spector’s production aesthetic taken to its most extreme limits. It’s likely that he (and Ike and Tina) believed that Tina’s voice was the perfect foil for the Wall of Sound, the vocal instrument most likely to stand up to it. It would be a sonic battle of epic proportions. And with the finished album as evidence, the verdict is: mostly it worked, and occasionally it didn’t.

The single “River Deep, Mountain High” opens the album. Spector’s cavernous production technique would come across especially well on monaural, lo-fi AM radio. Individual instruments are largely indistinct; instead the soaring onslaught of a seemingly infinite number of instruments and backing vocals chugs along while Tina shrieks atop the proceedings. It’s an epic recording, emblematic and representative of the Spector/Turners pairing. That said, Tina’s voice occasionally sounds ever-so-slightly off key. Her wailing makes it sound as if she’s struggling mightily to be heard amidst the Wall. The U.S. charts weren’t all that impressed, and the song is now seen as the culmination of Spector’s hubris; he quickly fell out of favor, not to return with any prominence for another three years.

Produced by Ike, “I Idolize You” is in a different bag altogether. While the title track had been brought in by Spector (he had a hand in writing the song), “I Idolize You” was a popular number from Ike and Tina’s catalog, having already been a hit. Compared to Spector’s approach, Ike’s production is certainly truer to the feel of the song. Tina and the Iketts have their vocals placed much more prominently in the mix, and Spector’s slabs of reverb are conspicuously absent.

On “A Love Like Yours (Don’t Come Knocking Every Day),” Spector’s production — full of choir-like backing vocals and sweeping strings – completely overwhelms Tina’s voice. She gamely turns in an emotive performance, but it’s buried in Spector’s over-the-top approach. Thing is, it’s still a worthwhile recording.

This bipolar approach continues its pattern with a re-recording of another Ike and Tina catalog number, “A Fool in Love.” Like “I Idolize You,” this Ike Turner production is among the finest tracks on the record. “Sho’nuff,” as Tina sings. The Iketts are in especially fine, funky form.

“Make ‘Em Wait” is, by Spectorian standards, a restrained effort. Lots of brass helps propel the song and give it a Spector trademark, but the chugging arrangement and backing vocal work (including Ike’s brief but note-perfect vocal turns) result in a splendid track that has worn well. The finger-wagging lyric is amusing, too.

It’s back over the Wall for “Hold On Baby.” Faint echoes of how the song might have sounded live do remain, and the manic riffing from the brass section hints at the energy of the Ike and Tina Turner Revue. Imagine a crack R&B band; now imagine them with a forty-piece orchestra behind them. With its start-and-stop rhythm, the song has more dynamics than are usually found in a Spector production.

“I’ll Never Need More Than This” sounds like a cross between Motown and Spector’s Wall of Sound; Spector never worked with the Supremes, but if you wonder what it might have sounded like if he had, check out this track. Tina’s up to her neck in Spectorian arrangement, but she manages not to drown. The Iketts don’t fare quite as well.

Beach Boys fans might be startled when they listen to Ike and Tina’s “Save the Last Dance for Me”; the arrangement sounds a whole lot like SMiLE’s “Heroes and Villains” (recorded around the same time and with many of the same musicians). Tina turns in a predictably ace vocal, but in the end this lead vocal could have been recorded by nearly anyone; the music is the star here; the string charts are especially tasty, washing the song in an infinite number of violins, cellos and harps.

It’s a jarring transition from there back into “Oh Baby! (Things Ain’t What They Used to Be).” An intimate arrangement featuring support by the Iketts and a beefy horn section calls to mind the Stax sound more than anything else. A thumping, steady beat makes this among the funkiest moments on the record; it’s also closest representation of what Ike and Tina sounded like onstage in those days.

Steve Alaimo had already had a hit with “Every Day I Have To Cry Some,” but in this team’s hands it’s transformed into a sweeping, Spectorian epic. Tina’s soulful lead vocal is backed by heavenly choirs and sleigh bells, all sounding like they were recorded in a huge cavern. The key modulates to up the emotional ante; thankfully that oft-overused technique is kept to a minimum on this album; in this case it works.

“Such a Fool For You” keeps the stylistic back-and-forth right on track: it’s a hard-charging funky number with stellar brass accompaniment. This one has to be an Ike production number; Spector would have never allowed such distinct and up-front mixing of the rhythm section. If this song doesn’t make you want to dance, you’re probably a rock journalist.

Ike shows up again to help close out the album on “It’s Gonna Work Out Fine.” If you can set aside any negative feeling you might have about “Ikey,” you’ll allow yourself a real treat; Ike’s spoken replies to Tina’s vocal lines are worth the price of admission. And while that electric guitar probably isn’t him, it certainly is true to the spirit of his style. Spector pulls the faders down on the band, so the song’s fadeout features only Tina and the Iketts.

Owing largely to its split personality, River Deep, Mountain High is not a perfect record. But in its own way, its inconsistency is also its strength. An album full of Ike’s productions (loaded as it would be with remakes of earlier material) would have arguably offered nothing new. A record filled with Spector’s Wall of Sound would have been too much to take for many, and would have likely further alienated Ike and Tina’s fan base. As it is, a mishmash of the two approaches still equals an album that’s an essential part of any comprehensive 60s music collection.