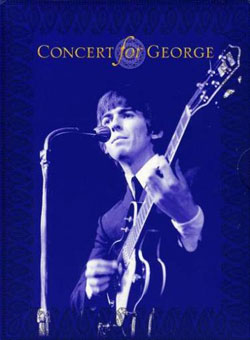 Eric Clapton and his pals made me cry. Really, they did. The moving all-star concert that was the Concert for George brought together a group of musicians and performers, all of whom possessed two important qualities: they were excellent at their chosen task, and their lives were connected in some way to George Harrison.

The entire concept of a tribute concerts is fraught with peril. Too often such events descend into one of two kinds of disaster. They might come off as overly reverent, elevating the honoree to demigod status. An even worse situation is the one in which the event is used as a way of promoting a bunch of flavor-of-the-month artists mangling the work of the honoree: “Here’s Lady Gaga singing ‘Crackerbox Palace!’”

Thankfully neither of those distasteful scenarios was the case in November 2002 at London’s Albert Hall. Instead a group of musicians — nearly all of whom will be very familiar to anyone who followed The Beatles or Harrison – turn in lovely, heartfelt songs from Harrison’s deep catalog.

When the then-surviving Beatles gathered in the mid 1990s to record some new music for their Anthology project, Paul McCartney was on record explaining how they approached the recording sessions. Paraphrased, McCartney said that he, George and Ringo Starr met in the studio and engaged in the polite fiction that John Lennon had already laid down his parts to “Real Love” and “Free as a Bird,” but wouldn’t be there that day. Their task was to finish the tracks. That approach allowed them to get on with the business of the sessions without getting too caught up in a reverent (and counterproductive) attitude.

The performers in Concert for George clearly adopted a similar sentiment when preparing for this show. The song arrangements closely follow the originals, leaving space for each of the featured players to make their mark. Yet the whole affair really sounds like a George Harrison concert (circa his 1992 Live in Japan set) minus George himself. And this is a very, very good thing. Viewers are therefore not subjected to “reinventions” of the man’s songs, an approach that would only lessen their beauty. Instead we see Billy Preston lead “George’s Band” in a soaring version of “Isn’t it a Pity” from All Things Must Pass. Jeff Lynne pops up all over the show – and is always in fine form — but nowhere is he as effective as on a rare and ethereal performance of  the Beatles’ “Lady Madonna” b-side, Harrison’s “The Inner Light.” Lynne performs it on acoustic guitar, backed by a large complement of Indian musicians under the direction of Anoushka Shankar (sitar master and daughter of Ravi Shankar).

The list of highlights is long. Old pal Ringo comes onstage to sing “Photograph” and Carl Perkins’ “Honey Don’t.” Paul McCartney does “For You Blue” from Let it Be, and a tearjerking version of “All Things Must Pass,” a song that The Beatles worked on endlessly but never released themselves. And the two-part “Something” features McCartney’s ukulele-led arrangement, segueing into a Beatles arrangement led by Clapton.

The list of stars goes on and on. Procol Harum’s Gary Brooker played on the All Things Must Pass LP, and at this concert he covers “Old Brown Shoe.” An almost-version of the Traveling Wilburys (Tom Petty, Lynne, and Dhani Harrison plus Petty’s band) faithfully recreates “Handle With Care.”

And in keeping with George’s dry yet irreverent sense of humor, members of Monty Python are on hand for “The Lumberjack Song” (with Tom Hanks as one of the Mounties) and “Sit On My Face.”

Re-released on Blu-Ray in 2011, the Concert for George is a two-disc affair. One disc includes the entire concert (kicking off with a long and lovely Indian music set, much like Concert for Bangladesh). Disc Two contains the theatrical cut plus bonus material. Watching either cut, most viewers will catch themselves thinking, “Wow; I had forgotten just how many great songs George actually wrote.”

As a tribute, Concert for George is note-perfect. As a concert event – as music – it’s equally worthy. George surely would have approved, as will anyone with an appreciation of his work with and after the Beatles.