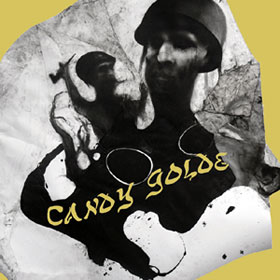 It might well be that calling Candy Golde a supergroup is an exercise in hyperbole. The fact is that each of the new group’s four members has a pedigree of some renown. Rick Rizzo was (and still is, as a matter of fact) guitarist with indie-rockers Eleventh Dream Day. Bassist John Stiratt is in Wilco. Bun E. Carlos – Candy Golde’s most well-known name – has held the drum throne in Cheap Trick since that group started in the 70s (though he’s scaled back live dates with that group). And Nicholas Tremulis is a well known musical figure in his native Chicago. In fact all four members of this project are Chicago-based (Cheap Trick was originally based in Rockford IL, but that’s close enough for rock’n’roll).

Candy Golde sounds a tiny bit like each of its members’ main bands, but it has a distinctive sound of its own. Their self-titled, self-produced debut (mini-)album was released in spring 2011, and features five songs. Four group originals plus one cover fill the disc, which is available on the usual formats (CD, download) and — notably — 10” vinyl.

Now, ten-inch vinyl is not a common format. Before receiving an advance copy of Candy Golde,  my collection – numbering in the several thousands – included but two ten-inch discs: 1979’s Six Squeeze songs Crammed into One Ten-inch Record and Cheap Trick’s Found All the Parts (1980). So while the use of vinyl isn’t that unique in 2011 (it’s making a measured and well-deserved comeback), releasing a ten-incher is.

The music – which is why we’re here, after all – is notable as well. “The Hold Steady” kicks off with some electronic percussion; that tells you that the band is up to something different, since Carlos and drums-in-a-box don’t often appear in the same song. Distinctive combo organ sounds (sounds like Vox, could be Farfisa) and a heavily whammied guitar riff come together to create something catchy. Subtle elements within the song make it hard to pin down: despite some sonics that call to mind the sixties, the track’s not retro; despite modern flourishes, it’s not all that modern, either.

A rocking cover of Paul Simon’s Graceland track “Boy in the Bubble” might seem like a left-field choice. And it is. Insistent drumming from Carlos and the song’s impossibly wordy lyric sheet are joined by some frenzied slide guitar. Despite those oddball (for a Paul Simon song) elements, it all works.

“Galvanize Me” has a Stonesy swagger and an unusually dry, boxy drum sound. The song itself offers up a delightfully updated take on ? and the Mysterians’ “96 Tears.” Judicious arrangement from the band means that the song’s over before you’ll want it to be.

The track with the most hit-single potential is “Trouble’s Coming Down.” With a structure and feel reminiscent of “Carolyn” from Steve Wynn’s underrated 1990 album Kerosene Man, the song weds heartland Americana to meat-and-potatoes rock. Shimmering vocal harmonies and ringing guitar chords meld nicely for this memorable cut. Hopefully it’s coming soon to a chart near you.

The slightly sinister “Why & Where” features more of Tremulis’ combo organ, but the rhythm section’s laid-back yet in-the-pocket groove is the song’s anchor. It’s almost (but not quite) a blues. A tasty guitar solo is joined by an equally tasty second lead line beneath it.

Then, after roughly twenty minutes, the record’s over. You’ll probably want more.

In the end, while it may be an overstatement to call Candy Golde a supergroup, it’s no exaggeration to say that this quartet is in fact a super group. It will be interesting to see if they’re a one-off or an ongoing proposition.