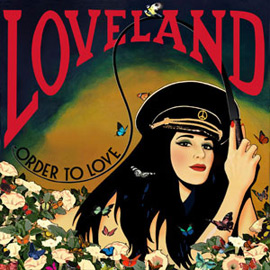 While I delighted in the release of Illegitimate Spawn, that 2007 Fuzztones tribute album gave me pause. The venerated garage-revival group hadn’t turned out a lot of new material recently; was this a marking-time effort to keep the band’s name in the public’s mind while they searched for new direction? The music – covers of Fuzztones originals as well as remakes of some of their remakes — was great. When the Fuzztones did release an album of new material, Horny as Hell raised additional questions: Was the group abandoning its sound? Lots more Hammond organ was in evidence, and horns ferchrissake! Thank goodness, their latest, 2011’s Preaching to the Perverted, shows that there’s still plenty of life left in the group, and in their traditional approach.

A lot of the credit goes to keyboardist Lana Loveland; her songwriting prowess has breathed new life into the Fuzztones. And as it happens, Lana has a pedigree in the genre. Prior to the Fuzztones, she handled organ duties for Sean Bonniwell’s band, keeping that group’ sound firmly within the double yellow lines (as it were). Prior to that, in the mid 1990s she led a group with her brother (guitar Lenny Svilar/Silver) called Cox Orange. That group recorded a four-track demo, but the group (according to the press kit) “came and went.”

Fuzztones front man (and now bandmate of Lana and Lenny) Rudi Protrudi heard that demo and encouraged them to re-record those songs, and he offered his services on bass guitar. The resulting recording has been released as Order to Love, credited to Loveland.

Those familiar to the Fuzztones sound will feel right at home with Order to Love. But there’s one important difference here: Loveland handles all of the lead (and harmony) vocals. The resulting record recalls Stop Pretending-era Pandoras. Loveland’s Vox organ is up front in the mix, and Lenny’s snaky guitar leads run a tad longer than they might on a Fuzztones record.

But don‘t get the idea that Order to Love is a jammy record. It’s full of verve and spirit. “Black Glove” would be right at home at a mid-60s Los Angeles go-go club. “Missing Illusions” captures the Music Machine vibe so well that one suspects Loveland might well have auditioned the tune for Bonniwell to display her kindred spirit. The song’s carnivalesque midsection even threatens to go reggae for a few seconds; Loveland clearly has lots of ideas, and works them into these songs quite well.

There’s a complexity, a willingness to explore, on the Order to Love songs that suggests Loveland has a lot on her musical mind. Fuzztones songs don’t generally switch time signatures; Loveland songs, it would seem, often do. And on Order to Love, the band is unafraid to stretch out a bit; witness the tasty solos on “Theater of Dreams,” which nearly breaks the four-minute(!) mark.

Even within the relatively tight confines of pop song convention, a song like “Nervous

People” is built around a catchy organ riff, and some dissonant vocal harmonies; there’s a nice mix of traditionalism and ambition on Order to Love. On “Missing Link” Loveland sings with the assured forcefulness of Grace Slick, while the band stomps along in as Stones-by-way-of-Chocolate-Watchband manner. Lenny Svilar opens up on some wailing guitar fills. And “Silence Everywhere” delivers plenty of solos – organ and guitar – while keeping the four-on-the-floor beat going strong.

A dive-bombing guitar run launches Rudi Protrudi’s “Bandit,” the sole track on Order to Love not composed by Loveland. As the song unfolds, overdubbed fuzz guitars twist around each other while Loveland weaves a hypnotic, moody vocal line atop it all. The shout-along “Constant Furs” closes things in style, with Loveland’s heavily vibrato’d Vox organ dancing along throughout.

Loveland would fit nicely on a co-bill with the Fuzztones, but the two (overlapping) groups’ approaches are different enough that no one would confuse them. Loveland pushes the boundaries of the garage rock genre much further than do the Fuzztones. Fans of this kind of stuff — people such as myself — will be glad to have both.