Home  »  review   »   Album Review: the Fuzztones – Preaching to the Perverted

Album Review: the Fuzztones – Preaching to the Perverted 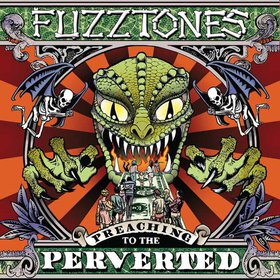 Some things can be counted on to never change. Other things do in fact change in basic ways, yet somehow remaining true to their original intent. In both those categories, paradoxically, we find the Fuzztones. The garage-revival group is fundamentally true to its original ethos, even though the group has gone through some dizzying changes.

Lead Fuzztone Rudi Protrudi is still fronting the group, and their shockingly authentic garage delivery is intact. Modern production techniques are balanced nicely with vintage keyboard sounds and layers upon layers of fuzz (natch), and the songs are true to the garage aesthetic: shorts, snappy, propulsive, moody and hooky.

But – to riff on an old saying — this isn’t your older brother’s Fuzztones. Originally based in New York City, the Fuzztones made a move several years ago…to Germany. And longtime keyboardist Deb O’Nair is gone, replaced – well, arguably more than simply replaced — by Lana Loveland.  She was formerly with Bonniwell Music Machine; more authentic garage-punk street cred than that is near impossible to imagine. Ms. Loveland has for all intents and purposes assumed the position of co-leader with Protrudi. She pens the lyrics* for the Fuzztones’ original songs, and delivers a keyboard attack that’s faithful to the past while moving in some subtle, nuanced directions. And in a move surprising for a group that’s always delivered intelligent covers, their 2011 album Preaching to the Perverted is a collection of all originals.

As is the case wih much modern garage, it can be fun to play spot-the-riff on Preaching to the Perverted: the central riff of “Invisible” is straight outta The Dukes of Stratosphear’s “25 O’clock,” but then it’s safe to assume Andy Partridge based his riff on something from 1965. This is music that chases its tail in the best possible way.

Loveland’s lyrics tread in “message” territory, which is a neat trick within the tight confines of garage-punk; you rarely get much more than two-minutes-fifty to make your point in a Fuzztones styled song, and there’s gotta be room for those riffs to breathe. Yet the high wire act is largely successful.

Normally modern production techniques work against the garage vibe, but here the Fuzztones make it work. This is music that sits comfortably alongside any of your old Sonics, Electric Prunes or Seeds LPs. Yet it’s every bit as vital as music from artists trading in a more modern-minded style (say, the Black Angels). When the Fuzztones go for a sinister, moody vibe (such as on “Don’t Speak Ill of the Dead”) the result is a shimmering, spooky number.

“This Game Called Girl” aims for a Yardbirds-style raveup, and makes good on that lofty goal. The band plays with force and finesse. Loveland’s ethereal organ work on “Lust Pavilion” (there’s a Fuzztones title for ya) blends nicely with some tasty slide gutiar courtesy of Lenny Silver (Lana’s brother, also formerly of Bonniwell’s band). Fez Wrecker’s bass lines are busy enough to be interesting all on their own, yet solid enough to anchor the songs in tandem with assured drum work. And the song’s coda out-Doors the Doors.

“Bound to Please” is a real stylistic left turn for the Fuzztones. Loveland’s electric piano, the melody and lilting arrangement are all shockingly out of place, but in a good way. Midway through, the song shifts gear – and jawdroppingly so — into a garage-punk pastiche of The Beatles’ “The End,” and gives Lana Loveland a chance to take the lead vocal. It’s amazing and clever beyond expectation.

Preaching to the Perverted wraps up with the deeply eerie “Come to Me,” a track that could easily serve as a soundtrack to a Herschell Gordon Lewis splatter-gore film. As a whole, the album displays more variety – and, importantly, room to grow — than previous Fuzztones releases. Who would have expected that the Fuzztones’ 2011 album would rank among their best and point the way forward for the group? Now, if they’d just come play some live dates in the USA…