DVD Review: What Ever Happened to Pink Floyd? 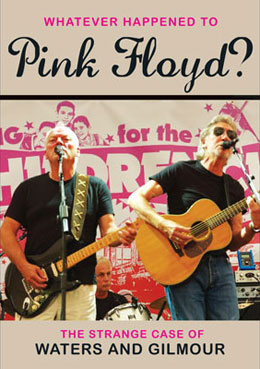 When choosing a favorite era, fans of Pink Floyd have a lot from which to choose. Some insist the band did its best work in the early days before Syd Barrett drifted off into the ether; others point to the massive critical and commercial success of the mid-1970s, beginning with Dark Side of the Moon and continuing through Wish You Were Here and Animals. A smaller but equally passionate group of hardcore fans ( a group that includes this writer) chooses as its favorite the band’s peak as a live unit, roughly 1970-71, when they performed extended pieces such as “Embryo,” “Cymbaline” and “Fat Old Sun.”

Relatively few would name the period between The Wall (1979) and The Division Bell (1994) as the height of Pink Floyd’s work. The thing is, even at its worst (The Final Cut) the band was never less than fascinating. And while for most of its existence the Floyd were among the most anonymous of rock acts – rarely giving interviews, handing out few publicity photos – during the 1980s and 90s their profile as individuals increased.

Not always for the best, of course. The individuals — especially bassist/lyricist Roger Waters and guitarist/vocalist David Gilmour – gained most of their notoriety in those days from their quite public feud. That story — along with the music, and the intersection of those two narratives – is the subject of What Ever Happened to Pink Floyd?, a 2011 documentary.

On many levels it’s a sad story. After well more than a decade of collaboration, two immensely – yet quite differently — talented men have a falling out and refuse to work together. Legal skirmishes and on-the-record sniping within the pages of popular rock magazines gains more attention than the music.

And the music suffers, first at the hands of Waters. Driven to express his personal vision, Waters forced the band into becoming a vehicle for his narratives. On paper they might seem interesting, but in execution, they often came across as morose. In response, Gilmour more or less abdicated; the first result of this breakdown was still critically successful: Animals featured some fiery playing and singing from Gilmour. But by the time of The Wall, Pink Floyd was Waters’ show. Keyboardist Rick Wright – a more fragile soul – was summarily kicked out of the band, relegated to employee status for The Wall’s live dates.

By the time of The Final Cut, Wright was gone altogether. Gilmour was almost invisible, and drummer Nick Mason found session drummers doing most of his parts. The band collapsed, and everyone commenced (or continued) solo careers.

As most will know, Gilmour and Mason rebooted the group in 1987 with the unintentionally ironically-titled A Momentary Lapse of Reason. Waters was not amused. The reconstituted Pink Floyd went on to massive commercial success (critical praise was more muted) and the Waters-Gilmour estrangement continued.

What Ever Happened to Pink Floyd? takes a look at all of this from the viewpoint of music journalists, collaborators and musicologists. While there are very few interviews with the principals (this is one of those “unauthorized” docs), the DVD takes a thoughtful, incisive and thorough look at the story. And in a deft bit of structuring – -aided to no end by recent events – the creators of this documentary manage to end on a positive, hopeful note.

Paradoxically, even though Pink Floyd found the period 1979-1994 to be its highest profile era, that time remains the band’s least-explored. Fans of the group will find What Ever Happened to Pink Floyd? a useful reintroduction to this period of the group’s story.