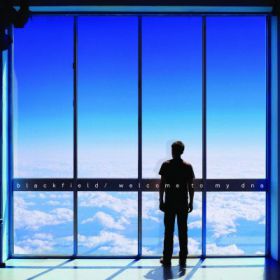 It’s a common sentiment among music fans who’ve lived through the 60s, 70s or even 1980s: Music’s not as good as it used to be. They just don’t make it like they used to. While I understand that sentiment, I’m happy to report that nothing could be farther from the truth. There is some really good music being made in this second decade of the 21st century, and some of it even sounds a bit like the great music of old.

As a longtime fan of the work of Steven Wilson – I’ve interviewed him twice and have covered many of his projects – I greeted news of a new Blackfield album with some anticipation. Although Porcupine Tree is Wilson’s highest-profile project, the man seems to be able to apply sufficient attention to all of his endeavors to make them meet his goals. I must say that it’s quite fascinating to witness the work of a man who — at age 43 – is clearly at the top of his game creatively.

It may come as a surprise to those familiar with Porcupine Tree but new to Blackfield that this duo – Wilson plus Israeli musician Aviv Geffen – is actually more mainstream and tuneful that that more well-known project. Their third album (or fourth if you count the 2009 Live in NYC CD/DVD) is titled Welcome to my DNA, and it finds the duo creating music that’s even more timeless and compelling than their earlier offerings.

Certainly Blackfield will sound a bit familiar to Porcupine Tree fans; Wilson’s voice and guitar work are prominently featured throughout the album. But in many ways the Blackfield sound of 2011 is most reminiscent of – wait for it — Electric Light Orchestra. Blackfield’s sonic delivery and arrangements favor a melancholy take on Jeff Lynne’s band circa A New World Record (significantly, this is the period before ELO started sounding like a wind-up toy).

Like all ten songs on Welcome to my DNA, “Glass House” features a strong, memorable melody with a heartbreaking vocal; as the song opens, it sounds a bit like the start of “Even Less” from Porcupine Tree’s 1999 Stupid Dream, but the song heads in an even more tuneful direction. Two minutes in, it (briefly) sounds quite similar to Jason Falkner’s “Untitled” from his Presents Author Unknown. Yet the song is never truly derivative, and serves as a great kickoff to the disc.

“Go To Hell” is a provocative tune. With a lyric that features a mere eleven words, it’s guaranteed to get zero airplay. But an infectious midtempo melody and a soaring string arrangement will have listeners trilling along “Fuck you all / fuck you / I don’t care.” Wilson and Geffen have never been slouches in the lyric department, so the lyrical brevity of this (and one other track) is surely this way by design, not laziness.

“Rising of the Tide” brings us back to heartbreaking territory. Wilson has a facility with melody that continues to amaze, and his ability to structure a song so that it unfolds gradually is nothing short of amazing. Geffen trades vocals on the verses, and here his thick Israeli accent is less grating than it can sometimes be; in fact when the two harmonize as they do here, it’s a thing of beauty.

Wilson ups the ante on “Waving.” His acoustic guitar, a slicing string arrangement and high harmonies are the ingredients in this catchy tune; “la la la” lyrics fit perfectly. And Blackfield’s knack for dynamics is unerring: the song kicks into higher gear every minute or so. This one will likely be a highlight of Blackfield’s live shows.

Initially built around Geffen’s vocal and a solo piano, “Dissolving With the Night” is another melancholy number. Geffen’s voice cracks — certainly on purpose – and while that might be one way to get the aching-heart vibe across, it’s distracting. On the second verse Wilson takes the lead vocal, and a dark, moody string arrangement comes in. Then all the elements come together, highlighting the slightly off-kilter chord pattern. By the end, the track has unfolded into a thing of dark, brooding majesty.

“Blood” is the heaviest track on Welcome to my DNA, but even here Blackfield stays safely distant from metal. Some catchy riffage moves the track along. It’s a full 1:45 before the four-word lyric kicks in; what could have been an extremely effective instrumental number gets even better. “Blood” feels a bit like a rock opera linking piece, not dissimilar to “The Rock” from The Who’s Quadrophenia.

The heartbreak quotient is dialed up to eleven for “On the Plane.” Whether by design or not, Wilson and Geffen have beaten Roger Waters in the songs-about-daddy game. The darker-version-of-ELO vibe returns here. A brief but beautiful guitar solo is the icing on the cake.

Geffen is at his best for “Oxygen.” Here his vocal works perfectly. This song balances the trademark Blackfield melancholy with an uplifting vibe, creating a song that would (in a better world) race up the charts.

“Zigota” has that late-night, end-of-album ambience. One begins to wonder how Wilson manages to churn out these fully-realized compelling pop numbers again and again. Plenty of rock composers would kill to write even one song like the dreamy “Zigota.” Four-plus minute in, the song adds a brief coda that’s the perfect ending to a winning album.

But it’s not over. The lilting, initially acoustic “DNA” closes the album with a waltzing melody. Geffen and Wilson seem intent on overachieving throughout Welcome to my DNA. Whether it’s the lyrics, the playing, the melodies or the singing, this is a near-perfect example of impossibly tuneful midtempo rock, ranking among the best the genre has to offer in the 21st century.