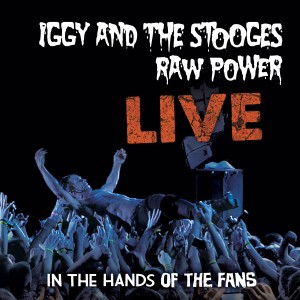 It’s tough to catch lightning in a bottle. Props to all concerned for giving it a shot, but Raw Power Live: In the Hands of the Fans ultimately misses the mark. Like the studio album it sets out to re-create, the show suggests the power and fury of a live Stooges show, but the listener is left with the feeling that, well, you simply had to be there.

Everyone involved is quite a bit older than they were in ’73, and in light of what they all did, their survival at all is a testament to…something. (Hint: not clean living.) Yet somehow the 63-year-old Iggy Pop conjures the menace of his 25 year old self. And blistering, suitably raw and atonal bursts of guitar from James Williamson gives the proceedings the right amount of grime.

It’s perhaps not fair to expect great things from an audio document of a band revisiting old material. On one hand, they do seem to be careening right on the edge, in danger of falling apart at any moment. That ambience is a necessary component of the Raw Power material, and they deliver it. But there’s a subtle feeling of the group having, well, rehearsed. It’s somehow not quite loose and shambolic enough. So maybe it’s the recording: whatever the reason, the whole affair comes off as oddly flat. A bootleg-quality tape might have delivered the goods in a more authentic manner. In the end, there’s something a little too professional about all of this.

The Stooges seem to hit their stride around mid-set with “Your Pretty Face is Going to Hell.” Steve Mackay’s saxophone squawks lend the set a bit of Fun House ambience, but he’s too often buried in the mix. And when Iggy hurls expletives before kicking into the blues of “I Need Somebody” (and then before and after each remaining song) he veers perilously close to coming off as a parody of himself.

They do provide a nifty bonus by performing “I Got a Right,” a legendary song from the Raw Power era that didn’t make the original album. It’s a speedy mess, finally delivering the expected dose of screaming chaos and mayhem. Which may leave the listener wondering: where was this band for most of the previous set?

All that said, it’s available on vinyl, and if you’re an Iggy/Stooges fan, you’ll want Raw Power Live: In the Hands of the Fans in spite of its shortcomings.