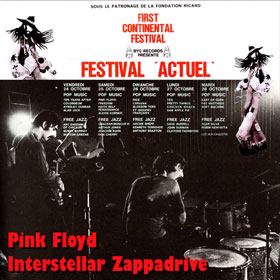 Everyone’s heard Robin Williams’ joke: “If you remember the ‘60s, you weren’t there.” It would seem that — at least occasionally – the reverse is true: If you don’t remember it, you were there. Or something.

Whenever asked, Frank Zappa denied that he and Pink Floyd ever shared a stage. The thought that these two pioneering and musically adventurous acts might have collaborated — even briefly – sent many fans into paroxysms of delight and imagination. But those in a position to know, said no.

Well, they were mistaken. A black-and-white photo surfaced some years ago, clearly showing the musicians on a Belgian stage: left to right were Frank Zappa on guitar, Roger Waters on bass, and Nick Mason on drums. Of course this drove Floydheads and Zappaphiles even crazier; the proof existed but there was no sonic evidence.

Fortunately, that too would eventually be rectified. The story – outlined (among many other places) in a blog post of mine from March 2010 – is that Zappa was emcee for the 1969 Festival Actuel, and though he later insisted he hadn’t joined any of the groups to play onstage, he did a freakout with Blossom Toes, and an extended piece with Pink Floyd. That set has been released (unofficially and without authorization, I must note) on a number of differently (and cleverly)-titled sets (Interstellar Zappadrive is the winner) but the recordings all draw from the same sources.

From the standpoint of sonic quality, the audience recording is quite good. The post-Syd Barrett lineup opens with “Astronomy Dominé.” Zappa hasn’t joined the foursome yet; the arrangement and performance are very similar to the live versions (recorded five months earlier) released on Ummagumma. David Gilmour’s psychedelic guitar solo is a highlight.

The medley “Green is the Colour / Careful With That Axe, Eugene” starts off with some plaintive vocalizing from Gilmour. Rick Wright’s keyboard (a Farfisa Compact Duo) provides the right dreamy/spacey texture for the number. The studio version of “Green” (from the More soundtrack) is a faster and much less compelling arrangement. An extended thirteen-plus minute version of “Eugene” follows. 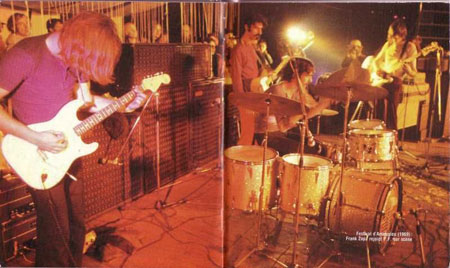 After that number, the announcer introduces the individual members of the band, pauses, and adds, “plus…Frank Zappa!” With (presumably borrowed) Fender Telecaster in hand, Zappa joins the band. What follows is two ear-splitting minutes of tuning (a feature common to many Pink Floyd audience recordings of the era). With that out of the way, Waters mumbles a song introduction, and Pink Floyd Plus Zappa launch into a twenty-two minute performance of one of the group’s earliest numbers, Syd Barrett’s “Interstellar Overdrive.” While the studio version of the song ran nine minutes, the Amougies Festival performance ranks among the longest unofficial versions in circulation. As is  typical for the band in 1969, this performance delivers the song at a much slower tempo than the released version.

Zappa — who, presumably, isn’t overly familiar with the tune – capably adds in guitar lines that work well with those played by Gilmour. The two guitarists’ styles are so different that the resulting performance sounds unlike anything else in the Pink Floyd canon, live or studio. The rendition is also a bit heavier than the Floyd would generally deliver. Seven minutes in, a strange, bleating percussive pattern (foreshadowing by four years some of the sounds on Dark Side of the Moon) is punctuated by a stomping riff, and then some suitably freaky guitar work. Wright takes a modal-sounding solo on his Farfisa while the two guitarists and rhythm section comp along. Then Zappa takes a tasty solo consisting mostly of single note runs played high on the fretboard. Toward the end of that solo, Gilmour joins in with some sympathetic (yet uncharacteristic) soloing of his own. 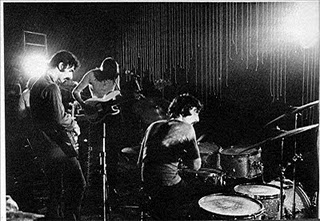 Then Wright takes another haunted-house organ solo while the rest of the band first lays out, and then comes back in with occasional punctuating lines. (The lead guitar here sounds like Zappa, not Gilmour.) Finally, the band returns to the song’s thematic riff, and ends to thunderous applause.

The remainder of the set as recorded does not include Zappa, who by this point has left the stage. “Set the Control for the Heart of the Sun” is unique in that Roger Waters spends a good bit of time throughout the song giving instructions to the sound man (less echo, etc.). Otherwise, it’s a typically interesting, spooky version of the song. The band winds up with their extended musique concrete piece “A Saucerful of Secrets.”

The hits just keep coming. While our story began with no collaboration, then a photo of it, then an audience recording, there’s more still. After the audience tape surfaced (along with nine discs of other performances from Amougies), a good-quality soundboard tape of three songs mysteriously turned up. The recordings of the “Green/Eugene” medley and “Set the Controls” are nearly up to the quality of the Ummagumma recordings. Even more mysteriously, Waters’ complaints to the soundman are not on this version.

Between the unique presence of Frank Zappa (other than Roy Harper joining the Floyd for one concert, the group didn’t invite guests onstage) and the soundboard recordings, the 2cd ROIO (Record of Indeterminate Origin) set Interstellar Zappadrive is an essential part of the unreleased Pink Floyd canon.

Postscript: There’s long been rumors of a film, too, but that hasn’t surfaced. Stay tuned.