A Conversation with Project/Object, Part 2

Bill Kopp: Ike, do you get any grief from…

BK: …from the Zappa estate for playing with André and the other groups? Does your doing so get you black-listed from ever appearing with Zappa Plays Zappa, for instance?

IW: Yes. And yes. Of course. The thing is, I’ve been getting grief from Gail Zappa from the day I walked in Frank’s door when I was twenty years old. So that really doesn’t bother me. And of course I’m blacklisted from playing…look, Dweezil [Zappa] and I, we talked about two, two and a half years ago. We talked about [me] trying to do some gigs with ZPZ. That’s when Ray [White] had first gotten into the band, and Ray said to Dweezil, “Come on; we have to do this together.” So I talked to Dweezil about it; we set it up. He wanted to do it, I wanted to do it. Basically, it’s for the fans.

But anything we wanted to do would have to be approved by Gail. Which, of course, I knew would never happen. And of course, once I got on the phone with Gail, she cursed me out for five minutes and slammed the phone in my ear. So, basically, nothing has changed in the last thirty-odd years.

I don’t worry about it. I am following Frank’s instructions, which is why — as you’ll notice — there are no lawsuits or anything having to do with any of my Zappa bands. Because Frank instructed me as to how to go about it, so that there would be no lawsuits from the Zappa Family Trust. Et cetera, et cetera. Those were part of my final instructions from him.

BK: André, I’ve read varying reports that Gail Zappa has, shall we say, made life difficult for Project/Object. Can you comment on that? I honestly don’t understand why she would want to stop anyone from bringing Frank’s music to the world, so long as it doesn’t negatively affect her wallet.

André Cholmondeley:  Hmm…how do you encapsulate her whole thing? Look: I don’t feel too bad about it, because she goes after people all around the world. She spent a lot of money in Germany, and all over the United States. She’s gone after a lot of people.

I’m at the top of her list, because I’ve got Ike Willis, who she really doesn’t like. And I’ve worked with more Zappa alumni than anyone. I’m not bragging; that’s just what I’ve done. Because I started very early on. I’ve had at least fifteen alumni onstage, sometimes only for one night. You know the list. Guys from the early Mothers all the way up to the ’88 band. So I really just barrel forward, and I don’t pay much attention to her requests for permission and stuff like that. 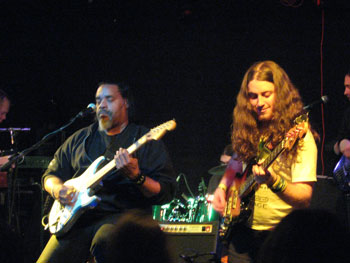 She has made threats; she’s threatened clubs. I’ve got a stack full of legal threats in my basement, none of which have ever gone anywhere. Because the bottom line is – just like a band doing AC/DC or Led Zeppelin or Rush covers – the United States law…she loves to bring up the Constitution, which is funny, because the Constitution has nothing to do with music publishing…but U.S. law does say that you can play the music of other composers as long as a few conditions are met. You’re playing in a club that has ASCAP [or BMI] dues paid; you’re playing in a club that’s not recording or broadcasting it or putting it on the web…there’s a few rules. Also, we can’t record or videotape something and then sell it.…Well, actually, you could, but you’d have to pay mechanical royalties.

So she’s tried and tried and tried, and mainly it’s a nuisance. And y’know, out of the hundreds of gigs we’ve done, she maybe got two cancelled. And that was because we were in a club that didn’t have their ASCAP license…

BK: They were asking for trouble…

AC: Yeah, they were asking for it. In another case, it was just at the beginning of LiveNation. They were going from Clear Channel to LiveNation, and we were at a club that had just become [connected with] LiveNation. And they were just about to start doing business with [Gail] and ZPZ. And they literally said, “Look, our lawyers say we shouldn’t do this.” So we got the phone call that they were getting ready to do a million dollars’ business with this woman, and they didn’t need this little gig in one of their small clubs up in Portland.

So that’s my thing on her. I say, “You do your thing, and I’ll do mine.” Frank Zappa is really not any more special than The Kinks or The Who or Led Zeppelin on some level; he’s not any more important. As far as “can you play his music,” he doesn’t get any special rights. 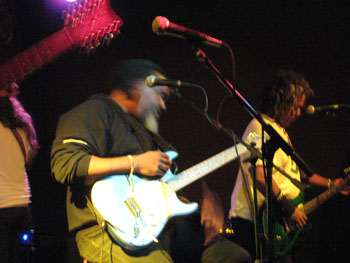 BK: Frank’s music went through so many sorts of phases. André, is there one era or style of his music that you personally favor?

AC:  I like all the eras, yeah. But my favorites would be three eras. Roxy and Elsewhere. And the period ’80 through ’82 is amazing, with so many sight readers in the band, doing stuff like “Sinister Footwear.” Some really difficult tunes came out of that era. And three great drummers.

And the ’88 band. I saw that band several times. Year after year, that ages very well. But I love 20th century orchestral music, so I loved when he did that. I love The Yellow Shark; that’s fantastic. Jazz From Hell. So I love the stuff that has nothing to do with a band, too.

IW: [shakes head slowly] There’s too many songs. Too many to have a favorite one. And there’s too many versions, arrangements of each song. So, no. It’s impossible for me.

BK: How do you rehearse this music? 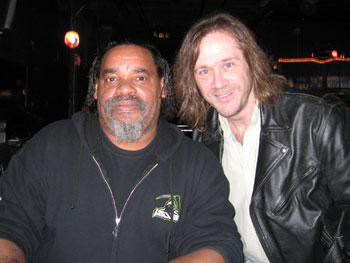 AC: It’s difficult these days. Because I live here, our drummer lives in Philly. Our keyboard player lives in Wilmington, the bassist is in Brooklyn. The Zappa guys fly out from L.A. or Detroit. What we do, though, is through the beauty of technology. We make sure we come up with specific set lists; I come up with those, and there’s feedback: people say, “I’d like to do this song.” So I put together the list, and we put together which particular version of the songs, and we make sure people have copies of everything.

We do a lot of homework. More than you might do in some other bands. And then we get together right before the tour. Two, three, four rehearsals; that’s it! Very long rehearsals; it might be like ten- or twelve-hour days. We’ve been upping that a bit lately; we’ll do that and see what things need working on, and then a couple days before the tour, we’ll do it again.

BK: Ike, in your opinion, what is the biggest difference between Frank the man and Frank the image that has been perpetuated in popular culture?

IW: Oh, god. The image of Frank is that he’s got horns in his head; he’s this evil guy. Yes, he’s demanding; he’s very, very demanding. He cracks the whip mercilessly, which is fine. But really, what a sweetheart of a guy. He was a really nice guy, as well as – of course — the most intelligent human being I’ve ever known. But all of that aside, he was really, really, really generous. And a sentimental slob teddy bear of a guy. I can’t stress that enough. Really generous and a really nice guy. I know; I was with him for almost seventeen years.