A Conversation with Project/Object, Part 1

Composer/bandleader Frank Zappa died in 1993, but fortunately many musicians remain committed to keeping his music alive. Shortly before his death, Zappa instructed his friend and bandmate Ike Willis to “Play my music.” Guitarist André Cholmondeley (sorta pronounced “chumley”) put together the band Project/Object as a vehicle to perform the music of Frank Zappa. For nearly a decade and a half, André and Ike have been performing Frank’s music together. During soundcheck prior to a recent show, I spent a few minutes with them. — bk

Bill Kopp: I first saw Project/Object right here in Asheville at Stella Blue nearly ten years ago. And I was absolutely floored. André, when did you first develop the idea for the band? And why exactly?

André Cholmondeley: Frank was the inspiration, of course. I was a big Zappa fan, starting about 1981. From 1987 to about 1991 I had a band called Zen Pajamas. Mostly originals, a few covers. We did a few Zappa tunes; we actually did a Steve Vai tune, too. Just for kicks, then a Zappa tune became two, or three. And then I had those Zappa parties in my house, right around 1989-90. At the third one, around ’91, I said, “Wait a minute: let’s have my band play.” We knew four Zappa songs, so we learned four more. And we played for about forty minutes. It was the highlight of the party; we had fun. So I said, “Next year!” 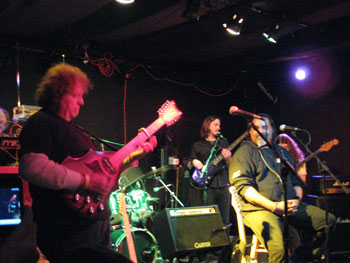 So the next year, I got a keyboard player involved, and other people. It became much more fleshed out. And we did an hour and a half or two hours of music. And right around that time I had the idea, “Wow. This is a working band. I can actually go out and do music with this.” And that’s right about when we started playing out live. Our first time in a club was 1991, maybe 1992.

BK: Ike, I know you play with a few different acts that perform Frank’s music. How did you first get involved with Project/Object?

Ike Willis: André and I, we go way back. Actually André and I are just celebrating our…twenty-sixth or twenty-seventh year together. I met André when he was a student at Rutgers. This was during the ’84 Zappa tour. We were at Jones Beach in New York, and André came over to see the show. He was walking around outside. So he and I started talking, and I took him backstage with me; I introduced him to Frank and everybody else in the band. We stayed in touch after that.

And it turned out that one of his buddies that he went to high school with was living out in Portland Oregon. That’s where I was living at the time. And this guy became my bass player in my band. One day, he asked me, “Do you remember André?” I said yeah, and he told me they went to high school together. And I said, “Oh, that’s cool!” 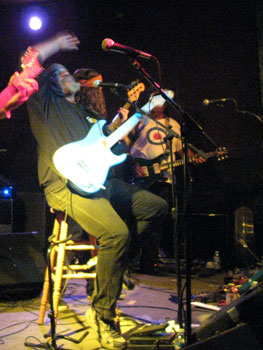 All the time that André was at Rutgers, every year on Frank’s birthday, they’d have that party in his apartment’s basement, and they’d play Frank’s music. And everybody started telling André, “You guys should be a band!” People really dug it, and the musicians were really great.

Fast forward to ’97. I had just gotten back from Israel, doing a thing [Banned From Utopia] with Joel Thome, the composer, who was doing Frank’s orchestra stuff. I had done a few gigs with him in Tel Aviv and Jerusalem. And the day I got back – I had literally just gotten off the plane – I walked into my house, and my wife said, “André’s on the phone.”

André said, “Look: I’m out of school. I put a band together; I finally got a band together. We’re playing Frank’s music and stuff like that. We’re wondering if you’d be interested in checking us out, and actually taking us out, touring with us.” I said, “Send me some cassettes so I can hear what you guys sound like live.” I got them and listened, and went, “Aha! Well! Well now! This will work.” So that’s how André and I got reunited in 1997. And I’ve been in Project/Object ever since.

André’s my manager now; he’s like the little brother I never had. He’s a genius; he’s the best guy on Earth. He’s consistent as the day is long; André is the guy, man.

BK: One of the things that impressed me about you when I first heard you on Frank’s albums was how you brought a sort of organic and playful sensibility — I certainly wouldn’t call it loose, but maybe relaxed…

IW: Well, define “loose.” For Frank, that was about as loose as you could get.

BK: …to music that was (in those years) growing increasingly technical. Do you see your style of singing and playing as bridging those two approaches? 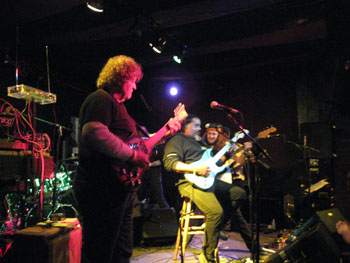 IW: Sure, of course. But that’s just the way I came up. My mom was a jazz singer. She was kids with Lou Rawls and Miles Davis. That’s who she grew up with: literally grew up with. She was born in Chicago, and she and Lou Rawls were in the church choir together. And in her teens, she went to St. Louis. Miles is from Alton, Illinois, which is right across the Mississippi from St. Louis. They all grew up together, ran around together. So that’s the home I grew up in. I used to go to rehearsals with my mom since I was “that big.” I’d watch her rehearse at gigs. And I started playing guitar when I was eight, after seeing the Beatles on the Ed Sullivan Show: “Mom, Dad, I want one of those!”

IW: That’s exactly what it is. It’s not like that any more. Now there’s Berklee, and people go to school, and can read music…things like that.

BK: I’ve read a number of accounts that describe Frank as an incredibly demanding bandleader. Yet onstage — I saw him twice — the bands always seemed to be having a lot of fun. And of course it’s pretty much a cliché by this point, the saying that having played with Frank is the best thing one could have on their résumé. Other than the obvious lack of Frank himself, how would you characterize the difference between playing with Zappa and playing with Project/Object?

IW: The lack of Frank; that’s it. Let me put it this way: before he died, Frank asked me, “Try to continue to play my stuff. Try to keep it alive as much as you can. Put a band together, and get guys that can play this stuff. As long as you do it the way I taught you.”

That’s the thing about Project/Object. We have a lot of fun, and that’s the key to the whole Frank thing. I mean, if you’re not having a good time doing this, then…you’re doing it wrong. 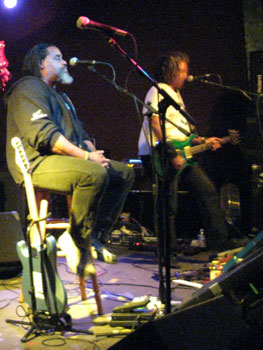 IW: Yeah, then it boils down to just math. And for all of my Zappa bands, that’s one of the requirements that I demand, and it’s the same thing he demanded of me. Because [with Frank] things got progressively more technical, but at the same time, we were laughing our asses off the whole time. And that’s very important. Because you can’t take yourself so seriously: “Oh no! We’re hot shit!” Can’t have that.

That’s why – André and these guys — this is my number one Zappa tribute band. Besides my personal bias for André, he gets it. They get it. It’s really important to me that whoever I play with, perform Frank’s music with, that they get it. Because if they don’t get it, then I don’t take ‘em out.

BK: The lineup of players in Project/Object has changed a lot. For some bands this could be a problem, but I almost get the sense that this fluidity might have even been part of your original concept. Was it, or was the original idea based on a consistent lineup?

AC: Absolutely. When I looked at the actual Zappa bands, I was inspired, because that’s exactly what he did. Every year or two, sometimes three times in a year. Sometimes because of them: someone got a better deal, or they just thought they’d get famous (as Frank said). That happened with [Terry] Bozzio.

AC: Yeah, there are a lot of jokes around that. But Frank would say, “You need to move on. I don’t want a violin player.” Or a trumpet player, or whatever. “Go start your own band.”

BK: He told that to Lowell George [Little Feat]…

AC: In my case, it’s a low-budget gig. It’s definitely a labor of love. No one’s making a lot of money doing hit music these days; Christina Aguilera has to cancel tours, y’know. It’s tough out there.

And it’s tough to get people who can take two, three, six weeks off from work, and come out and do what we’re doing. And being able to play this stuff; that’s step one. But step two is being able to take a chunk of time off. So that’s a couple reasons why we’ve changed lineups through the years.