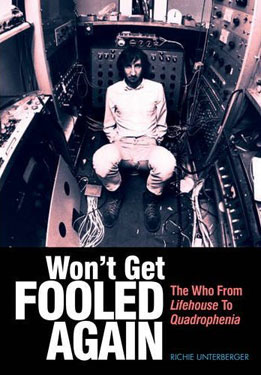 More than a hundred years ago Prussian statesman Otto Von Bismarck said “Laws are like sausages: it is better not to see them being made.” In a general sense this wry observation is probably true, but thank goodness that modern society has political junkies – many of them reporters, as it turns out — who follow the intricacies of politics, keeping those involved (more or less) honest and letting other interested parties know what’s happening.

Some would agree that a sentiment similar to von Bismarck’s applies to the creation of music. They might argue that a certain level of mystique is a good thing. For the rest of us, thank goodness, there’s Richie Unterberger.

While most of the renowned music historian’s work (Unknown Legends of Rock’n’Roll, Eight Miles High and others) are built around first-person interviews he’s conducted, Won’t Get Fooled Again is more a work of historical analysis, closer in approach to his book The Unreleased Beatles.  Where his latest entry differs from all of those titles, however, is that Won’t Get Fooled Again is an exercise in musical forensics: Unterberger has unearthed long-forgotten interviews with Pete Townshend and (significantly) many, many others close to the scene during The Who’s most ambitious era.

Covering the period from the germ of the aborted Lifehouse project through Quadrophenia, Won’t Get Fooled Again aims to piece together what really happened. It also attempts to divine why other things didn’t happen. The official reasons for the non-appearance of Lifehouse (the film, the album, the whatever) are myriad, and in the book’s first half, Unterberger pieces together the story from quotes old and contemporary in search of an answer. Not surprisingly, the picture that emerges is messy, inconsistent and confused, full of the feeling of lost potential. Perhaps paradoxically, Unterberger does a fine job of presenting an orderly summary of that confusion.

Townshend has long had a well-deserved reputation as a fine interview subject; his candor in interviews has often been nothing short of remarkable. But it’s worth considering — though Unterberger (politely) never addresses the idea explicitly – whether the chummy relationship that many of the rock journos in the 1970s had with Townshend might have colored their perceptions, or perhaps even kept them from pressing for answers that, y’know, made sense. Unterberger’s forensic reconstruction of events makes it quite clear that Townshend’s concept of Lifehouse changed on a seemingly daily basis. And his supposedly setting-the-record-straight efforts in connection with his 2000 release Lifehouse Chronicles muddy the waters even further.

But none of that takes away from the power of the music, and Unterberger leavens his discussion of the development (and non-development) of Lifehouse with a thorough analysis of the music. Known to the world as Who’s Next (plus myriad scraps scattered across other releases) the Who music from that era ranks as some of the group’s (and rock’s) best. Unterberger connects the dots (to the extent they can be connected) to illustrate how the songs from the aborted Lifehouse would have worked together musically, if not conceptually.

The book continues through the period between Who’s Next and Quadrophenia, and points out an interesting fact: there isn’t actually a period between the two projects. Though it evolved and mutated, the idea for Quadrophenia was bouncing around in Townshend’s head for quite some time. Unterberger outlines this through interview quotes, and then gets into a discussion of Townshend’s solo album Who Came First. By this point in the saga, the reader may begin to wonder if all of Townshend’s works — from The Who Sell Out through his unjustly maligned solo work Psychoderelict — are in fact part of one grand piece, not unlike Frank Zappa’s Project-Object.

In any event, the author embarks next on a thorough discussion of unreleased material related to Quadrophenia. Here Unterberger’s writing is most similar to his work on The Unreleased Beatles book. Yet at this stage, the book’s one flaw – and it’s admittedly one that can be overlooked – is its lack of a discographical reference. Unterberger repeatedly refers to the relevant legitimate albums (Who’s Next, Odds and Sods, Who Came First, Quadrophenia) and assorted bootlegs, but an endnotes rundown of these would have been a useful aid, since interested parties will want to hear the unreleased demos Unterberger mentions.

In researching the book, Unterberger didn’t merely dig up a pile of long-forgotten magazine interviews and string them together. He conducted a good bit of first-person interviews with engineers, artists and others who had first-hand knowledge of the projects being discussed. What he didn’t (and presumably wasn’t able to) do was get an interview with Pete Townshend himself. Then again, perhaps Unterberger decided that Pete had said enough about his activity in the early 1970s (much of it contradictory) and that any additional comments – made, as they would be, nearly forty years after the fact – would add to the confusion rather than elucidate.

Drawing again on the modern-day interviews he did do, Unterberger engages in some thought-provoking Monday morning quarterbacking: since Quadrophenia was originally planned as a quadraphonic recording – this was never realized – could engineers go back to the source tapes and create a true 5.1 mix? [Note to anyone in the Who camp who might be listening: consider giving Steven Wilson a ring about this idea.]

Unterberger wraps up the book with discussion of relevant events dating after the early 70s: the 1979 Quadrophenia film, the mid 90s Quadrophenia concert revival, and Townshend’s attempts to mount a Lifehouse production near the end of that century. It seemed that the ghost of Lifehouse still haunted Townshend (he admitted as much by having Psychoderelict’s protagonist Ray “High” Highsmith haunted by his own unfinished work, a Lifehouse doppelganger titled Gridlife).

Because it covers in detail a specific period of Who history, Won’t Get Fooled Again often reads like something it isn’t: Book Two of a three (or four) volume work covering the band’s entire recorded history. Yet in terms of what is covered, Unterberger has chosen perhaps the most interesting era of the group’s saga, and has provided a detailed analysis of it. If one is going to engage in an exercise of musical forensics, there are few subjects more compelling than the period encompassing Lifehouse to Quadrophenia. For anyone whose interest in The Who extends beyond the songs themselves, Won’t Get Fooled Again is an essential read.