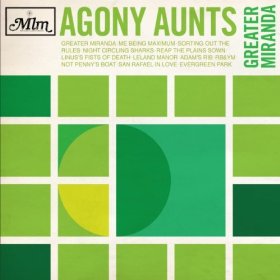 Some pop auteurs are almost too clever for their own good. There are those rare students of the pop form who seem to completely understand it on a molecular level. Some of them are music critics (ha!) and a smaller number actually practice the form.

Even more rarely, a bunch of these pointy-headed lovers of jawdroppingly-crafted pop music congregate in groups and produce music. That’s exactly what has happened here. Imagine a musical collective that takes the best of The Mamas and the Papas and weds it to the smart pop of groups like The Orange Peels. The result would be what is described (without a bit of overstatement) as “Bay area psych-pop supergroup” Agony Aunts. Featuring Allen Clapp of aforementioned Orange Peels and likeminded souls, the album Greater Miranda sounds like a lost-lost sunshine pop record from 1968 filtered through a 21st century sensibility.

You’ll find no grunge in these grooves. What you will find are a dozen tracks of melodic transcendence. Perfectly blended vocals and subtle (very, very subtle) compositional flourishes characterize the songs on Greater Miranda.

What’s sort of weird is the way the lyrics often take turns toward darker territory. What else to make of songs with titles like “Night Circling Sharks”? But many listeners won’t even notice; instead they’ll trill along with the impossibly bubblegum-catchy songs. While not an excursion in nostalgia, the Agony Aunts have created a record that nonetheless looks forward and backward at once, not unlike Redd Kross’ underrated Third Eye album.

It’s a high-wire act, producing songs that feel simple and straightforward but are in fact complex little compositions. “Reap the Plains Sewn” is just such a tune, with interweaving melodic lines that overlap. “Linus’ Fists of Death” is the Agony Aunts at their most Orange Peels-sounding, but even then there’s the demented Cowsills-on-acid chorus of “Death death death! / Yeah yeah yeah!” It’s brilliantly, wonderfully twisted stuff.

Even when they’re not getting all smartypants, the Agony Aunts turn in lovely music. With its subtle Rickenbacker jangle, “Leland Manor” finds them toning down the too-clever-by-half approach (which — don’t get me wrong — I love) to craft a slightly more serious work. As with all of their songs, the little details are well-attended to. The listener can dig deep and appreciate those details, or let the beauty of the songs wash over them. Or both.

The group gets silly on “Adam’s Rib,” a song evocative of nothing so much as Donny and Marie Osmond’s “A Little Bit Country / A Little Bit Rock and Roll.” Again, the details are just right, from the spoken verse to the Floyd Cramer-styled piano.

Things take a turn toward the deeply bizarre with a song called “RB & YM” which sounds uncannily like the theme song for a nonexistent show on CNBC. Who else but the Agony Aunts would craft a song with a chorus wholly constructed of “ba-ba-ba”?

If that weren’t enough — and it most assuredly isn’t: more please! – the tour de force of Greater Miranda is “Not Penny’s Boat,” an ambitious song that sets out to condense six seasons of Lost into a three-minute pop song. And it rocks, too, sounding a little bit like very early Split Enz.

Call it art-pop. Call it whatever you like. But don’t miss Agony Aunts’ Greater Miranda, an album with not a single weak moment. It’s pure pop perfection.