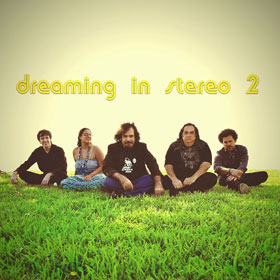 They’re not afraid to list their influences: Todd Rundgren, Jellyfish, Yes, King Crimson. Put another way, the members of Miami, Florida-based Dreaming in Stereo dig precisely-crafted yet challenging music. They like ear candy that hold up to careful listening. Better yet, they craft music that aims for – and largely meets – those lofty standards.

The group’s second long player is called 2, and it features mid-tempo songs that are carefully (but not fussily) arranged. The songs put Fernando Perdomo’s clear, expressive voice right out front. In addition to the standard rock combo lineup of instruments, Dreaming in Stereo makes effective use of strings in many of their arrangements.

Song construction employs plenty of dynamics, but never to the point of calling attention to the craft. Rather than pointing out similarities to the Grays, it’s perhaps more useful to observe that Dreaming in Stereo seem to draw upon the same wellspring of inspiration that informed the music of Jon Brion and Jason Falkner.

Lovers of the three-minute pop idiom, Dreaming in Stereo largely confine their songs to that framework; only four of 2’s thirteen tracks extend much beyond 180 seconds. And the three-minute limit is a double-edged sword: you’ve got to make your point quickly enough to get it across, but you can’t overstuff the song. One or two good ideas is about the limit.

Dreaming in Stereo delivers those ideas to listeners. A track like “Gonna Sleep Until Tomorrow” (which, as it happens, is one of the longer tracks) unfolds with a lovely, soaring instrumental section. But rather than being some prog side-excursion, it’s just a well-executed restatement of the vocal part of the song. Like many of the songs on 2, the hook is restated until it burrows into the listeners’ consciousness. But it never overstays its visit.

The songs never quite get into harder rocking territory a la Cheap Trick. There’s a more baroque and refined sensibility to the album’s songs. The brief instrumental “Goodwill” is a prime example of this: its aesthetic is closer to The Left Banke than The Who.

The vaguely spooky (and lyrically spartan) “Open the Door” sounds like a late 70s John Lennon demo overdubbed by Teenage Fanclub with Emitt Rhodes producing. A seeming hallmark of the band’s writing style is to keep lyrics to a minimum. They’re not Ramones or (god forbid) Silver Convention, but neither are they Bob Dylan. Most songs have a fairly short set of lyrics.

Perdomo cedes lead vocal duties to honey-voiced Marisol Garcia on the acoustic “Without You” (an original song, not a Badfinger cover) and the melodramatic “Saturday Song.” The wonderfully wistful and anthemic “Standing Still (While the World Goes Around)” sports an arrangement that — especially thanks to the drumming style and the violin overdubs – is highly reminiscent of Electric Light Orchestra and Klaatu.

They’re all good-to-very-good songs. But the real gem among gems is “Music All Around Me (Dudley Moore’s Last Words).” With a guitar lick straight out of the George Harrison playbook, the majestic ballad unfolds slowly. Its bittersweet lyric is wedded to a arrangement worthy of Jeff Lynne.

In the end, it’s as simple as this: listeners who nod approvingly at any of the artists (except Silver Convention!) name-checked on the preceding 400-plus words would do well to check out Dreaming in Stereo’s 2.