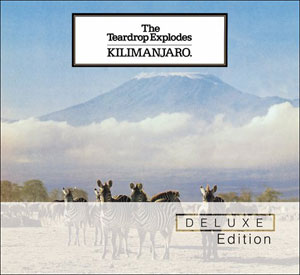 The 1980s sometimes get a bad rap when it comes to music. True, there was a surfeit of radio-ready product that wasn’t exactly built to last for the ages. And the stuff that was good — Dire Straits, Fabulous Thunderbirds, Asia (hey: I liked ‘em!) got played to death. One had to dig a bit deeper to find interesting music.

But it was there if you looked and listened. The early strains of the kind of music with which Wilco and the Jayhawks would later find success (of the critical and commercial kind) was evident on albums by The Long Ryders, the BoDeans and many others. The whole Los Angeles-based “paisley underground” scene gave birth to an impressive number of bands who created high quality material: the Bangles, Green on Red, The Dream Syndicate, The Three O’clock, and many others. A bit farther north, Translator was combining the influences of guitar-hero rock from the late 60s and 70s into something new and exciting.

Of course, the British Isles had their own scene, and influences passed back and forth across the Atlantic. As ever, the British strains of a particular style would differ from their American counterpart. And as ever, one need only to look toward a city on the Mersey River to find some of the most compelling music coming out of the UK.

In 1978 The Teardrop Explodes came on the scene with their own modern take on British psychedelia. Fronted by the enigmatic, idiosyncratic and fascinating Julian Cope, The Teardrop Explodes released a mere two albums during their brief time together (plus one belated release nearly a decade later), but their debut stands as a high water mark of 80s-style danceable psych pop. That debut disc – 1980’s Kilimanjaro — has now been given the deluxe reissue treatment.

Cope’s voice is capable of covering a fairly impressive range, but on Kilimanjaro he stays within a tight range of notes, and makes it work. Meanwhile his thick and propulsive bass guitar work (coupled with Gary Dwyer’s brightly-mixed drums) cranked out a groove. Listeners could dance while their minds expanded. Chiming guitar figures similar to the sort that The Edge was putting on U2 albums) filed in the midrange. Unusually, the band adorned the entire album with tightly-arranged trumpet section. So hypnotic numbers like “Sleeping Gas” get the extra texture of brass. The unusual juxtaposition works well.

David Balfe’s keyboards (mostly piano and organ, plus a bit of synthesizer here and there) are also applied as a textural element: if late 60s Pink Floyd were reinvented in 1980 as a dance band, they might have sounded like The Teardrop Explodes. (And a connection between the two bands does in fact exist: one of the trumpet players on Kilimanjaro is Norman “Hurricane” Smith, producer of many early Pink Floyd records.) Hints of the later druggy “Madchester” sound (Happy Mondays, Inspiral Carpets) can be found in the grooves of Kilimanjaro.

Throughout the disc, an impressive knack for catchy melodies abounds, and plenty of dynamics gets applied to songs like the winning opener “Ha Ha I’m Drowning” and “Treason.” Listening to Kilimanjaro some thirty-plus years on, it’s interesting how little the album has aged. Yes, there are sonic artifacts of the era, but the strength of the songs and performances cut through the cobwebs. In particular, the busy bass lines – reminiscent of the approach favored by The Vapors’ Steve Smith — make careful listening a worthwhile experience. Clever use of stereo miking on the drums adds excitement to numbers like “Second Head,” though the songs hardly need the help. The dreamy track “The Thief of Baghdad” is a near-perfect melding of melody, atmospherics, dynamics and an insistent beat. The album wraps up with the impossibly catchy “When I Dream;” even at seven-plus minutes (the original vinyl had a shorter edit) it’s still a pop tune of the highest order. There’s not a weak track in the bunch.

I bought Kilimanjaro on vinyl when it was new; then and now I considered it essential listening. But the new expanded reissue features thirteen additional related tracks. “Reward” was on an earlier alternate release of the album, and is right up to the standard of the main tracks. An alternate version of “Sleeping Gas” makes more prominent (and hypnotic) use of the venerated Vox Jaguar (a sound familiar to garage rock enthusiasts and owners of Elvis Costello’s second LP). A false ending harkens back to 1967. The remaining tracks are assorted odds-and-ends from the era (Kilimanjaro has gone through a number of reissues and reconfigurations), some of which are less than essential. “Kirby Workers Dream Fades” is a psych instrumental, sort of The Teardrop Explodes’ answer to The Beatles’ “Flying.” The demo-ish “All I Am is Loving You” may test the listener’s patience for its four and a half minutes run time.

The album’s title track wasn’t on the original release, but it’s here. Sounding very much like a soundtrack piece, “Kilimanjaro” makes use of tribal-sounding drums and a synth line that manages to sound like an acoustic instrument on a windy plain. An eerie chanted overdubbed choral vocal arrangement repeats a single lyrical line while a guitar squall fades in and out. It’s spooky, moody stuff, but quite uncommercial compared to the album as originally released. “Strange House in the Snow” features scraping cello, haunted house piano and a manic Cope vocal; it’s interesting but would have sounded out of place on the album (it too was on a previous single-disc reissue). “Use Me” is essentially a Cope solo outing on vocal and acoustic guitar. “Traison (C’est Juste Une Histoire)” is “Treason” with the vocal recut in French.

The bonus disc closes with an overlong, rambling live version of “Sleeping Gas.” It does provide a hint of the experience of a live show. As one might expect, it’s all about Julian Cope. As an album closer, it’s damaging to the flow.

Despite that final misstep, the 2010 reissue of Kilimanjaro is a reasonably successful attempt to create a definitive release of this thirty year old album.