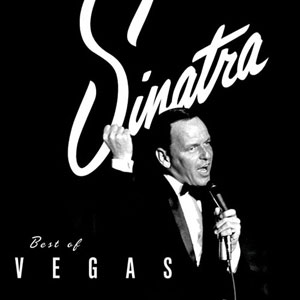 In 2008 Rhino released the box set Sinatra: Vegas, a collection of five separate concerts by The Voice. Each show got a disc: November 1961 at the Sands; early ’66 also at the Sands; March 1982 at Caesar’s Palace; and April 1987 at the Golden Nugget. (A DVD covered an additional show from Caesar’s in the late 70s). This musical travelogue through Frank Sinatra’s Vegas years was an essential artifact for the Sinatra aficionado. For everyone else, it was a bit pricey and perhaps excessive.

So in 2011 Concord — to whom much of Sinatra’s catalog has now reverted — remedies this situation with a single-disc distillation from the four audio recordings. Best of Vegas plays like a single concert, beginning with the emcee’s announcement and Sinatra’s walk-on, backed by Antonio Morelli & His Orchestra. On the first four tracks from this date, the band swings tightly while Frank himself is pretty loose. Plenty of “goddamns” and lyrical ad-libs fly, but Sinatra remains clearly in control, and at or near the top of his game.  The song selection is unassailable: “”The One I Love Belongs to Somebody Else,” “The Lady is a Tramp.”

Five songs follow from the ’66 date with the impressive, amazing support of Count Basie & His Orchestra conducted by Quincy Jones. This section — with a swaggering Sinatra — is the best of the lot, but the song selection is a big part of this success. Cole Porter’s “I’ve Got You Under My Skin” is a highlight among highlights. Rarely has a singer sounded as self-assured as Sinatra on these tracks. That self-assurance is clearly earned. The playfulness remains, and at this stage it still has an air of genuineness. Years later, some of the delivery feels “Vegas-y” but in 1966 it was still fresh, not having been parodied to death at that point.

After a one-minute instrumental intro, Sinatra embarks on nearly seven minutes of what can only be described as standup comedy. His timing is impeccable, and while some of the jokes might fall flat in the 21st century (a number are decidedly dated, taboo and off-color by modern standards), Sinatra delivers the lines well.

By 1982, Sinatra was a towering institution; his presence all-but-literally towered over Vegas, as Charles Pignone’s liner notes point out. Past his prime but still in control of his instrument, here the Chairman dials back the intensity of the performance, with a song selection to match. The shtick and patter are more by rote here, but on songs like “All or Nothing at All” he still delivers the goods. But the cracks are showing a bit.

The band is more impressive on the 1987 cuts, but Sinatra’s voice is appreciably thinner here as well. Unassailable song choices serve to make the most of Sinatra’s diminished abilities, but even here at age 72 he could still run vocal circles around any so-called competition. Sinatra makes a point of identifying the composer and arranger of each song; classy, since he was likely under no obligation to do so. The man gave credit where it was due. “Pennies From Heaven” is the highlight here.

The entire disc is flawlessly sequenced, truly giving the feel of some sort of time-traveling single concert. The changes in Sinatra’s abilities are not so great as to be very noticeable when listening in sequence; putting the CD on shuffle might result in a jarring and less pleasing) experience. And the producers have minimized the sonic differences of the four performances, assign to the disc’s seamlessness. The disc wraps up like you thought it would: the “Theme from ‘New York New York’” is taken from the 1982 date, and here both Sinatra and the band pull out all the stops.

An expert distillation of four historically representative shows, Frank Sinatra’s Best of Vegas is a fine listen start to finish. It stands well on its own, and can serve equally well as a sampler of sorts for anyone considering purchase of the 2008 box set.