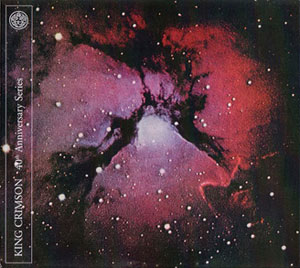 From the album’s opening strains of “featured player” Harry Miller’s string bass, it’s clear that Islands is going to be quite a different affair from its predecessors. Released in 1971, King Crimson’s fourth long player found the incredible self-destructing band reinventing itself once again.

The 1969 debut In the Court of the Crimson King was widely hailed at the time of its release and remains the band’s best-loved and highly-regarded work (though perhaps tied in both respects with 1974’s Red). The follow-up In the Wake of Poseidon is too often dismissed as a rethink of that album, but in reality it’s more of a Robert Fripp-centric work that displays its own charms, and found the band delving into more dissonant realms.

Lizard (with yet more lineup changes) headed in a jazz-folk-baroque direction while making few bows toward anything like accessibility, but it too provided rewards on close listening. But yet again the band imploded. So by the time of sessions for Islands, the lineup was Fripp on guitars and keyboards; Mel Collins on all manner of wind instruments; Ian Wallace on drums; lyricist Peter Sinfield and – here’s where things got a bit odd – Boz Burrell (later of Bad Company) on bass guitar and lead vocals.

You see, Boz didn’t know how to play the bass. The story goes that Fripp taught him what to play note by note; as with most stories, the truth is perhaps slightly different; one suspects Burrell possessed at least some rudimentary playing skills; he had previously sang lead in a band with future members of Deep Purple, so he had some understanding of musical theory. In fact Boz’s playing on Islands doesn’t lead the listener to question his chops; while he’s no John Wetton, neither is he, say, Sid Vicious.

But back to Islands itself. Mere seconds after the very classical-feeling string bass opening, Miller changes his style to include some very nasty scrapes on the strings. Then flues and assured glissando piano lines (the latter courtesy of Keith Tippet, another of five featured players on Islands). Burrell’s plaintive voice comes in next. After three minutes of all this, the more-or-less rock section of the track (“Formentera Lady”) kicks in. It’s actually an unusually simple song for King Crimson; built around a single note and chord, were it to lack the classical filigree, it wouldn’t be much of a tune. Nearly five minutes pass before Fripp plays the first note on his (acoustic) guitar. But what the band does with this simple tune is inventive, and skewed enough to identify it as King Crimson. Collins’ sax work – which sounds largely improvised – adds an off-kilter feel to Boz’s droning bass guitar figure. Some soprano vocalization (courtesy of featured player Paulina Lucas) comes as something of a surprise. In the end, ten-plus minutes of “Formentera Lady” feels a bit excessive.

The instrumental “Sailor’s Tale” finds King Crimson segueing into slightly more familiar footing. A bracing horn arrangement from Collins – supported by keening guitar lines from Fripp – are laid atop an insistent yet subtle bass guitar and drum foundation. Shireking saxes and progressive, almost jazzy playing from Burrell weave in and out of a mix that finds Fripp playing a solo that (on one hand) bears no sonic relation to Collins’ subsequent solo but (on the other) fits quite well. Some daring Echoplexed guitar from Fripp sounds like almost nothing else you’ve ever heard; it’s almost the guitar equivalent of scat singing. The Mellotron makes its first prominent appearance here; first, it provides a suitably doom-laden bed for Fripp’s six-string excursions. Then it develops into something altogether more doomy and malevolent, with a feel closer to the debut album than anything the aggregation had done since that time.

“The Letters” has a medieval vibe to it, at least in the beginning few moments. A showcase for one of Sinfield’s better (bitter!) sets of lyrics, the song unexpectedly switches gears into some deeply weird squawking saxes and paint-peeling guitar work. Then it’s back to a more subtle interlude, then back to the free jazz bit. Next, Boz tries his hand at a “21st Century Schizoid Man” style vocal delivery, but does so without all the effects (save a bit of reverb). The song ends as plaintively as it began, though with a bleak, gothic lyrical postscript.

“Ladies of the Road” is an oddity, even by the standards of a King Crimson catalogue full of oddities. A paean to groupies, the song is built around Sinfield’s borderline-misogynistic lyrics. It also features some intentionally (yet maddeningly) plodding bass work, and some skronky sax work that would have seemed otherworldy to most rock fans in 1971. The song’s playful vocal chorus is also unusual in the Crim catalog. Slashing, atonal and thickly distorted guitar lines are employed judiciously by Fripp. The song may or may not appeal to the casual King Crimson fan; it certainly bears little sonic similarity to anything the band did before or since.

The featured players take center stage on the lilting and beautiful “Prelude: Song of the Gulls.” It’s a tightly-arranged, forlorn feeling piece that does indeed evoke visions of the English seaside. Other than possibly Collins, there sounds to be no musical involvement form any of the main Crimson musicians on this one (Fripp wrote the piece, though).

The remaining twelve minutes of the album’s original release are given over to the title track. A mannered Boz vocal is joined by piano and flute, then a cornet solo by Marc Charig. That solo connects Islands sonically to Lizard; in fact large swaths of “Islands” would sound right at home on that album. The jazz aesthetic was at its apex in King Crimson on these two records. Musically the melody is pretty accessible stuff, albeit with jazz trimmings. Fripp’s Mellotron is put to subtle yet effective use here.

Nine and a half minutes in, it seems as if “Islands” is over. But tacked on after nearly a minute’s silence is the sound of Fripp speaking to the featured players while they tune up and prepare to play. Studio engineers and beeps are briefly heard. This snippet was a “hidden track” from the original vinyl release, but oddly not on original CD versions.

As part of the group’s ongoing 40th Anniversary Series, Fripp and Steven Wilson sourced the original session tapes to remix and brighten the album for reissue. In addition, they’ve provided a long list of extras. A short bit of the title track with a prominent oboe is one of these; an alternate take of “Formentera Lady” is another. An alternate mix of “Sailor’s Tale” is different yet every bit the equal to the original version; if anything it’s even more sinister. A track called “A Peacemaking Stint Unrolls” showcases some musical ideas that would later be more fully developed for “Lament” (on 1973’s Starless and Bible Black) and “Larks’ Tongues in Aspic Part I” from 1974. A short rehearsal of “The Letters” is (unsurprisingly) much more loose-limbed than the official version, but does serve to show off the band’s chops and musical interplay. The remix of “Ladies of the Road” goes for a heavier feel; whether such was needed is a decision best left to the individual listener. The backing vocals are also much louder, giving the piece an unfinished feel in this form.

Were all that not enough, the companion DVD of the 40th Anniversary Series release includes much more. In addition to the now-standard (for Fripp and Steven Wilson’s purposes, anyway) 5.1 DTS mix, 2010 stereo mix and original mix, the DVD includes an “alternate album” constructed primarily from heretofore-mentioned tracks, and two additional programs.

The first of these is entitled “Routes to Islands” and features nearly an hour of fascinating material. The Islands lineup (Fripp, Burrell, Collins, Wallace) is heard rehearsing “Pictures of a City” from In the Wake of Poseidon. It’s a ragged, rough performance, and Boz shows himself to be no Greg Lake (on bass or vocals), but it’s a treat to hear nonetheless. A rehearsal of “Sailor’s Tale” puts Collins’ flute front and center – and lacks the dissonant Frippery of the finished version — but the arrangement is tentative and a bit listless. A very brief fragment of “Islands” is a solo Mellotron performance from Fripp. A pair of rough mixes (“Formentera Lady” and “Sailor’s Tale” show that the source tapes contained plenty of worthwhile material, and that – as is often the case – mixing of a record can be vital component in that overall process that we call “songwriting.” A version of “Drop In” — a song never officially released by the band in the 60s or 70s but a staple of their early live repertoire – gets a rehearsal run-through by the Islands lineup. Live versions of “The Letters” and “Sailor’s Tale” are also included; both are sourced from previous releases on the King Crimson archival label KCCC.

The other program is called “Assorted Ladies” and features three alternate takes of “Formentera Lady” plus another “Ladies of the Road” and the latter’s Fripp/David Singleton mix from the bonus section of the audio CD. This material falls into to “hear it once and that’s probably enough” category.

The Islands lineup also released a live LP called Earthbound, but all concerned have long since disowned that album – due in large part to its perceived sonic deficiencies; it does in fact sound like a bootleg – but that disc is of historical interest.

Not the strongest of King Crimson albums (not by a long shot) Islands remains a worthwhile excursion in its original form, and the remixed, expanded 2010 reissue remains – like all others in the series to date – an essential purchase for the Crim aficionado.