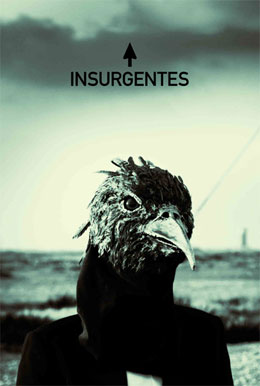 Steven Wilson is a man with a lot on his mind. The peripatetic and almost impossibly prolific composer/musician has his hand in a myriad of musical projects: Porcupine Tree, solo work, Bass Communion, no-man, Blackfield. He produces other artists. He is deep into the remixing and remastering of the legendarily influential King Crimson back catalogue. And yet amidst all of this activity he — with near-constant visual collaborator Lasse Hoile – set about making a film called Insurgentes.

Insurgentes is really several films in one. One some level it’s a promotional reel for Wilson’s solo album of the same name; in fact the film includes a fair amount of music from that 2009 release. But on another level it’s a biographical film, if an intentionally disjointed, nonlinear and incomplete one. And it’s a mood piece as well.

The film is alternately talky and filled with what almost feels like silence. Of course in those latter instances it’s not truly silent; atmospheric musical pieces (from the Insurgentes CD as well as ambient pieces by Bass Communion) are the aural backdrop for evocative visuals. But evocative of what, exactly? That’s not clear. Wilson and Hoile favor grotesque imagery – dozens of defiled caskets stacked haphazardly in a field; a riverside shack decorated with filthy baby dolls; a group of bizarrely-dressed folks (in bird masks or gas masks) skulking about; and those peculiarly English fields with massive concrete structures of unknown purpose. “We like decay,” Wilson admits at one point, and the visuals back that up: scenes of disused industrial machinery, warped railroad tracks and rusted ironwork are scattered throughout the film. It’s all very effective at setting a mood that’s unsettling, a bit creepy, foreboding, and yet attractive and compelling at the same time.

The talky bits — and there are lots of them in Insurgentes – consist mostly of Wilson sharing his thoughts on various topics of interest. He has a lot to say about download culture, the aesthetics of music packaging, and growing up in the 1980s. And every bit of it is interesting – at least mildly so for a casual viewer, and essentially so for the Wilson fan. His viewpoints on these and other topics most definitely inform his musical approach. He makes no attempt to be inscrutable or oblique, and goes a fair bit in the direction of explaining why he does what he does, and why his music sounds the way it sounds. It’s perhaps not too great a flight of overstatement to compare the articulate Wilson to the Pete Townshend of the 1970s: always good for a pithy quote, yet clearly possessed of strongly-held, fully thought out and well-supported opinions on a myriad of subjects.

There’s a bit of humor in the film, as well: two particular sections illustrate the filmmakers’ sense of humor. One involves a discussion between Wilson and Opeth’s  Mikael Akerfeldt as the two peruse the latter’s vinyl collection; the other is a series of bits interspersed throughout Insurgentes in which Wilson devises newer and cleverer ways to dispatch an item that is (on some level) the bane of his existence.

Insurgentes is also poignant at times. This is true during the scenes of Wilson revisiting the school of his youth, and even more so when he explains the extent to which his parents (both of whom appear in the film) had an impact on his musical development. But perhaps the most moving scene is one in which Wilson reflects on the Victorian practice of photographing the dead. That subject segues into a brief rumination on the concept of loss, and finally Wilson expresses how the fear of loss makes him hesitant to have children. Immediately after this especially revealing statement, Wilson turns away from the camera.

If you enjoy any of the music with which Steven Wilson has been associated, spending 75 minutes watching Insurgentes is nothing short of essential.