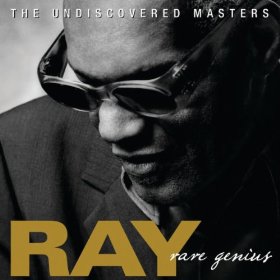 During his lifetime, Ray Charles released something like sixty albums of original material; that doesn’t begin to include hundreds of compilations, posthumous releases, guest spots, reissues and the like. With a recording career that spanned from 1949 until his death in 2004, Charles masterfully traded in a variety of styles, creating a few of his own in the process. With all that work, it was inevitable that some good studio material remained in the can and unreleased.

Concord Music handles Charles’ catalog these days, and has been responsible for a passel of fine (and thoughtfully annotated) expanded reissues in recent year. Concord’s VP for A&R John Burk went through the archives at Charles’ old studio, R.P.M., and discovered masters dating back as far as the 1970s. Twelve of these tracks have been compiled on Rare Genius: The Undiscovered Masters.

“Love’s Gonna Bite You Back” dates from a 1980 session, and a disco shuffle vibe is evident in the drum accompaniment. But it’s an upbeat song, and the listener may be left wondering why it wasn’t deemed satisfactory for release thirty-odd years ago. “It Hurts to Be in Love” is another good one, in a more jazz-soul vein, and according to the liners, Charles knew it was worth releasing: not long before his death he had compiled it onto a tape for possible release. The horn charts are particularly tasty.

A 1972 session produced “Wheel of Fortune.” A fully developed string section and some amazing piano work from Charles – and yet more punchy horns, judiciously applied – keep things moving. “I’m Gonna Keep Singing” is less impressive, with an arrangement that feels too retro and too contemporary all at once; it’s vaguely reminiscent of some of Donald Fagen’s post-Steely Dan work, with a Charles vocal that comes off more as self-parody than anything else.

The quality standard is reestablished with the blues “There’ll Be Some Changes Made.” Jazzy guitar and some expressive B-3 work are just some of the track’s highlights. Even the dated synthesizer work is appealing in its own way. “Isn’t it Wonderful” is a soulful pop tune; its chord structure fails to break any new ground, but it’s a sturdy vehicle for typically fine vocal work from Ray.

“I Don’t Want No One But You” has the feel of a late-night set closer. Its gospel-inflected arrangement fits the song well. The horn charts lean a bit towards Las Vegas – you’ll possibly picture Ray in a tux on this one – but strong backing vocal parts make it a full-realized track.

Among Ray Charles’ myriad talents was his ability to synthesize different American musical forms into something uniquely, well, Ray Charles. He does it again Country-style on Hank Cochran’s “A Little Bitty Tear,” recorded in 1983. Like Sinatra and only a handful of others, he makes the tune his own. “She’s Gone” is a more straightforward pop-country number; it’s not bad by any measure, but it pales in comparison to the other tracks on Rare Genius.

The disc concludes with the track that has gotten the most press: a reading of Kris Kristofferson’s “Why Me, Lord,” a 1981 duet with Johnny Cash. The Billy Sherrill production means that to some extent the tune would sound as it does regardless of who plays on it, but Cash’s lead vocal and Charles’ piano add some character back  into this by-the-numbers Nashville production piece.

A bit of sonic twiddling was applied to some of the tracks; the producers felt it necessary to “finish” tracks that had the basics but weren’t quite polished enough for as-is release. The list of sessioners included guitarist Keb’ Mo’ and nine or so others. With the noted exceptions, their presence is subtle and they don’t call attention to themselves, which is as it should be. If you didn’t know, you’d think these were all finished long ago. Thank goodness that Concord – thoughtful stewards of Ray Charles’ recorded legacy – located these gems and brought them to release.