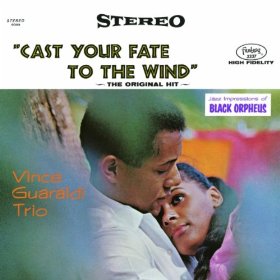 All too often, when presented with the phrase “crossover jazz,” contemporary listeners bring forth mental visions of Kenny G. His sort of insipid, non-challenging elevator music is, for many, the typical example of what happens when jazz goes popular.

It was not always so. Jazz pianist Vince Guaraldi was already at the top of his game in the winter of 1961-62 when he recorded the album Jazz Impressions of Black Orpheus with his trio. With Monty Budwig on the upright bass and Colin Bailey on the traps, the album – though packaged as a bandwagon-jumping exercise in the bossa nova subgenre – was a monster hit. Though this all took place before his even-higher-profile Peanuts cartoon soundtrack work, Jazz Impressions was that rarest of creatures: an album that satisfied both jazz aficionados and the mass pop market.

The album’s success was due in no small part to the inclusion of a Guaraldi original called “Cast Your Fate to the Wind.” Rarely has an instrumental been so aptly titled; the sprightly, upbeat, jubilant tune exudes a carefree attitude. The signature melodic line so embedded itself in the popular consciousness that it has popped up again and again, sometimes in rather unexpected places. In the mid-1960s through early 70s, John Fogerty’s group Creedence Clearwater Revival recorded for Fantasy, the same label that released Guaraldi’s Jazz Impressions. In the 1980s, the title track from Fogerty’s “comeback” LP Centerfield was built around a lick quite similar to Guaraldi’s.

Vince Guaraldi’s album as a whole is every bit as successful as “Cast Your Fate to the Wind,” though it surveys a number of styles and moods. And though billed as a bossa nova excursion, that style appears rather subtly. Guaraldi took the music from the 1959 film Black Orpheus and recast it in his own context. The hybridization is a successful one.

The original album’s eight tracks have been joined by five additional numbers on the 2010 Concord reissue. In addition to a single edit of “Samba de Orfeu,” four alternate takes of other album tracks are included. Derrick Bang’s reissue liner notes center mostly on “Cast Your Fate to the Wind,” but make clear that the author understands his subject well. (Bang is working on a book about Guaraldi.) Yet left unexplained* is a minor mystery: the original back cover of the LP listed the fourth track as “Generique” and credited it as public domain; on the reissue it’s listed as “Felicidade,” a composition by Antonio Carlos Jobim and Vinicius de Moraes. Still, a minor mystery is all it is, so we’ll leave it at that and simply enjoy this delightful album.