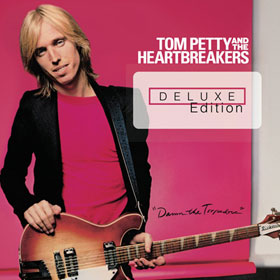 This is a bit of an odd one for me. Generally when I consider reviewing reissues, the material dates from the 1960s, or occasionally early 70s. But Tom Petty and the Heartbreakers’ commercial and critical breakthrough Damn the Torpedoes was originally released in late 1979. Somehow that seems too recent.

But of course it’s not. While Petty and the Heartbreakers’ music has since passed into the echelons of that dreaded genre of classic rock, it was pretty edgy stuff in ’79. Yet precisely because of its ubiquity on AOR through the 80s and beyond, it has become to some degree part of the soundtrack of our lives (or some people’s lives, at least; your kilometerage may vary).

As such it requires a bit of effort to listen to Damn the Torpedoes with fresh ears. But that’s what I’m tasked  with doing, gentle reader, and I’m pleased to report that heard through those ears, Damn the Torpedoes remains a damn fine album.

The Gainesville FL native’s approach was a successful blend of Byrds and Rolling Stones influences, somehow distilled through a late 70s sensibility. In 1979 Petty wasn’t yet an MTV star; not the least of reasons for this is that MTV didn’t yet exist. Listening to the album now, it has the unmistakable feel of a greatest hits collection; that’s down to the fact that, well, many of these songs were in fact hits. By 1979 the singles market was already moving away from rock (to the extent it had ever embraced it to begin with), but anyone who listened to radio during the era may find themselves a bit surprised at just how many of the songs on the album are lodged into their permanent musical memory.

No less than four of the album’s songs – “Refugee,” “Here Comes My Girl,” “Even the Losers,” and “Don’t Do Me Like That” were AOR hits. And the remaining five songs are up to that standard as well’ had there been more room on the playlists, they too would have likely made the big time. “What Are you Doin’ in My Life?” in particular ranks among radio-ready tracks that didn’t get an airing, mainly because the other tracks on the album were just…that…good.

Radio was ready for Petty’s approach by the tail end of that decade. New wave and punk had made tiny inroads commercially, but their aesthetic — stripped-down, more direct and honest – had made an impact on the overall rock ethos. So Petty’s songs — built as they were round chiming Rickenbackers, straightforward rhythm section and a keyboard player who limited himself mostly to piano and Hammond organ – were just what the doctor ordered in 1979.

Universal’s new 2CD reissue of this classic album adds a smattering of live tracks from the era, plus a couple of unreleased tracks and a b-side. The highlights among these are a live version of Eddie Cochran’s “Something Else” (with an arrangement halfway between the original and Sid Vicious’ cover from a couple years earlier) and a demo version of “Refugee” that serves mainly to show just how much producer Jimmy Iovine brought to the table in helping Petty to polish the songs for mass consumption.

It’s a bit hard to conceive that someone who’d appreciate this music won’t already have it in his or her collection, but the new remastering and bonus tracks make a re-purchase worthy of serious consideration.