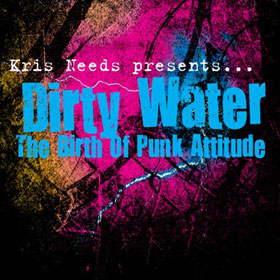 As its name makes clear, Dirty Water: the Birth of Punk Attitude takes a unique approach to the concept of punk: here it’s defined more as an attitude than a genre. This shift in emphasis is a liberating one, because it results in a collection that’s more hip mixtape than historical anthology or chronological overview.

Punk fanzine editor Kris Needs compiled the 2cd set for UK label Year Zero — a label affiliated with Fantastic Voyage, the people who have given us excellent reissues and compilations of older and forgotten music. Needs’ approach here is to bring together music that — for him – represents that punk attitude. And his wide-net philosophy – perhaps best defined as the idea that punk is anything that refuses to be bound by convention – results in a collection that is free to include Sun Ra alongside the MC5.

The idea seems to be that punk is whatever the artist wants it to be: you can draw upon older influences if you which, but you get to decide which influences, and how they’re applied. So punk is as likely as not to look to early rock and roll for inspiration.

Across 33 tracks, Needs’ collection tosses in artists familiar and obscure. For every New York Dolls (“Subway Train” from their first LP) there’s an all-but-unknown Zolar X track. When you hear Zolar X’s 1974 demo “Space Age Love” (recorded in Memphis at Ardent!) you might say to yourself, “I bet The Damned listened to this song.”

Some of this stuff is truly weird. The Deviants’ “Garbage” is elemental and crude, but it’s also almost (dare I say) progressive in its arrangement. Yes, there’s simulated (or real) vomiting, but there are also several distinct movements that draw upon musique concrète, Bo Diddley, free jazz, sixties garage and the Fugs (or perhaps Lenny Bruce). If that’s not punk, then nothing is.

There’s definitely a British point of view to the track selection. While they’re recognized now for their work, back in the day acts like the Pink Fairies, Dr. Feelgood and the Sensational Alex Harvey Band were all but unknown un the USA. In Britain they were a bit less obscure. Plenty of American acts are included, though: The Dictators and the Seeds are both represented, and by less-than-obvious tracks, too.

Punk is too easily dismissed as full of anger or lack of direction; that’s simply not always the case. Gene Vincent’s “Blue Jean Bop” is in its own way as punk as the Stooges (the latter represented here by a rare bootleg-quality live noisefest), but it’s fun and celebratory in a way that Iggy and his pals weren’t.

This collection is all over the stylistic map, which one suspects is precisely the point. A set that includes Flamin’ Groovies, Can, Red Krayola and Silver Apples is certainly aiming outside the mainstream. But the selections (and their non-chronological sequencing) hold up well. Hardcore rock fans will likely have a good half of this music elsewhere in their collections, but some gems like the Last Poets’ “On the Subway” and “Oo Oo Rudi” from the Jooks may be new (and welcome) to their ears.

There’s some important history here, too. A live (Peel sessions) reading of the rare T. Rex cut “Elemental Child” neatly bridges Marc Bolan’s fey, hippy-dippy early work with his harder-rocking later style. And Death – the African-American punk/metal trio recently rediscovered and championed in the mainstream press – is represented by “Politicians in My Eyes.”  Yes, if you’re getting the impression that Dirty Water: The Birth of Punk Attitude covers an impressive bit of ground in under three hours, you’d be correct.

Needs’ annotation – in a thick booklet included in the attractive package – is a useful, informative and entertaining accompaniment to the music. Ultimately, if you’re open to the idea that Sun Ra – -whose 1973 track “Rocket Number Nine” inhabits a musical galaxy that connects Spike Jones and Parliament/Funkadelic —  is punk, then Dirty Water: The Birth of Punk Attitude will be a fascinating listen, one you’ll likely turn to for sonic enjoyment again and again.