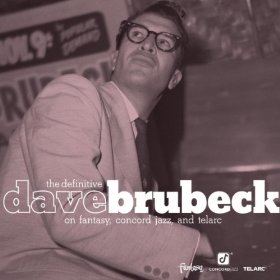 “Definitive” is a strong word. Not to belabor the obvious, but it means to define something; definitive means that the things affords an accurate representation of another thing. In this case, a new 2CD set from Concord Music Group sets of to define the recorded works of jazz pianist-bandleader Dave Brubeck as presented through his work for three labels: Fantasy, Concord Jazz and Telarc.

Of course that’s a tall order. Brubeck started his recorded career in 1949 and today (age 90) still plays. He recorded for the aforementioned labels as well as others. He’s received numerous awards and is one of a select few jazz players whose name is known to the general public. His style is wide-ranging and accessible.

As the introduction to the pleasingly detailed liner notes explains, this set earns its use of the word definitive in part thanks to its being compiled by Russell Gloyd, Brubeck’s longtime manager, producer and conductor. Gloyd (by way of renowned music historian Ashley Kahn) provided the liner notes, too.

The first disc kicks off with an archival recording (owned by the Brubeck Institute at the University of the Pacific) that shows the pianist years before his professional recorded debut. The sonic quality is dodgy, but acceptable for a track of such historical import. From there, sonic clarity takes a major leap forward: there’s such life in the recordings –studio, live, it doesn’t matter — that the listener will feel they’re right in the room with Brubeck and his band.

While Brubeck is capable (and interested in) a wide array of emotional expression in his playing and arranging, it’s fair to say that the words exuberant and upbeat apply to a great deal of the material on this set. Even when a song is expressing melancholy or sadness, there’s a sunny side to the performance as well. Brubeck shows himself early on to be a master of assimilating any style — adapting any approach — to his playing.

The first disc covers Brubeck’s career from that 1942 recording up to 1953. You’ll hear solo piano and band arrangements, and while the label says Dave Brubeck, you’ll be treated to tasty solos on the vibes (courtesy of Cal Tjader) and other instruments; Brubeck’s arrangements always make effective use of his players. His reinvention of standards like “Singin’ in the Rain” sometimes render the songs nearly unrecognizable, yet they’re remarkably no less accessible in their mutated forms. As keeping with his approach in those early years, most of the early racks are brief and to the point, rarely heading off into improvisational realms. As such, the first disc is packed with seventeen songs.

Despite the careful, thoughtful track selection, the word “definitive” remains a bit suspect. This is due mainly to one simple fact: the period 1954 to 1981 is skipped over; listeners interested in this lengthy and creatively fertile period are advised to look for the new Legacy of a Legend compilation on Columbia. (To be fair, if one reads the entire title, it’s clear that the set is meant to define Brubeck’s work for the labels mentioned, so let’s not quibble.)

The second disc is split almost evenly between live and studio selections from the period 1982 to 2004, and show Brubeck’s range to have only expanded. His 1959 monster crossover hit “Take Five” is represented not by the original, but instead by a live version from Moscow in 1987. The more piano-centric works on this disc display his power and subtlety, but there is a more calm, regal feel to the music here. With the exception of “Here Comes McBride” and a few others, this later music doesn’t have the swing of the earlier material.

In sum, The Definitive Dave Brubeck on Fantasy, Concord Jazz, and Telarc is a good survey of the referenced periods, and the first disc is jammed full of exciting music. The later music on the second disc remains impressive but somehow feels less than essential. It’s a good entry point into Brubeck’s music, and the liner notes elevate it a few notches, but in the end it’s a bit unbalanced, suffering from that big 22-year hole in the middle, and its affording of equal weight to the later material.