Having recently reviewed a new Tina Dico set, I’ve been thinking about this group lately. Here’s a quick look at a live recording of note from Zero 7.

The electronica subgenres of trip-hop and downbeat are often pegged as cold, distant. Any hint of an organic vibe is labeled artificial. The good licks are lifted from great songs of old. And without a doubt, the stuff is made for listening at home, on one’s hi-fi. Or so goes the conventional wisdom. 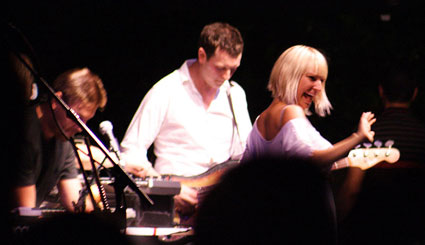 Zero 7 puts the lie to all of it. A few weeks after releasing their 2004 sophomore release, When It Falls, the group — yes, you read that right: group — performed a Stockholm show broadcast on Swedish radio. Surprisingly, their slinky vibe comes across well in a live setting. Their sound is something of a laid-back throwback; in fact they could lay claim as the Alan Parsons Project for the 21st century. The songs float by, with enough hooks to stick in one’s mind for days afterwards. Yet the assured vocal work (supplied by a roster of three or more singers), coupled with the relative musical anonymity of Zero 7’s prime movers — makes comparisons to the APP inevitable. Or to Steely Dan, though the Zero 7 crew are nowhere near as sterile as that faceless-duo-plus-sidemen operation.

In a live setting, Zero 7’s trademark gurgling synths, loopy bass lines, tinkling acoustic guitars and moaning vocals all come through clearly in the mix. Yet there’s enough variation from the studio arrangements — plus actual interaction with the audience — to make this Swedish FM broadcast worth medium rotation on one’s (well, okay) home hi-fi system.