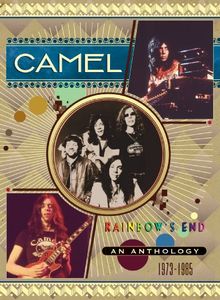 “They tell me you’re searching…” So begins “Slow Yourself Down,” a track originally on Camel‘s debut LP in 1973. In fact the material on the first disc of the new 4CD compilation Rainbow’s End: An Anthology 1973-1985 finds the UK progressive group in search of a style. Thoughtful listening will spot influences far and wide: the aforementioned track has a Latin break reminiscent of Santana‘s early work. Thanks in particular to the guitar fireworks of Andrew Latimer — the crushing sound that kicks off his solo is a thing of beauty — and the impressive organ work of Peter Bardens (a former bandleader himself who had employed Mick Fleetwood and Peter Green, two future members of Fleetwood Mac) , the early material is compelling. And don’t infer from this reviewer’s use of the phrase “in search of a style” that the band is faceless or less than compelling. Not at this stage, anyway.

The early material betrays some trepidation in the vocal department; many of the lead vocal parts are buried in the mix, and the band favors instrumentals, suggesting they weren’t all that confident with their vocal abilities. That said, the singing is creditable; while neither Bardens nor Latimer would give Roger Daltrey any competition in the front man sweepstakes, Camel’s vocals are on a par with similar contemporary artists Caravan, Egg and so forth.

In fact the Caravan comparison is a telling one. Because (Pete Frame-wise) Camel’s and Caravan’s family trees overlap somewhat, there are definite sonic similarities between the two groups. But Camel drew inspiration and influence not only from jazz but from what we’d now call proto-jam bands. While the Mellotron breaks on “Never Let Go” suggest a more commercially-minded King Crimson, on tracks like “Curiosity” and “Freefall” (from Mirage) the group finds inspiration from an unlikely source: the Allman Brothers Band. What keeps Camel from being pegged as also-rans is their penchant for combining these disparate influences into a UK prog framework, occasionally creating something unique in the process.

The 4CD set draws liberally from live tapes to chart the group’s history over the period 1973-1985, and the first disc includes live tracks from a BBC Radio One gig. The tasty analog synthesizer on “Earthrise” deserves special mention.

Disc Two kicks off with a nineteen-minute live “Homage to the God of Light” which was originally a bonus track on the CD version of the debut LP. Here Camel moves a bit onto prog-jam territory, but with less noodling than that might suggest.

The disc also includes a selection of highlights from The Snow Goose, perhaps Camel’s most well-known album. While that set was designed as a complete listening experience, the tracks selected for this compilation serve the group well. Unusual in that it’s an instrumental concept album, The Snow Goose is best heard in its entirety, but the flute-centric tracks here will likely draw newbies into Camel’s world.

The remaining tracks on the second disc chart Camel’s small move toward a balanced commerciality as represented by tracks from Moonmadness and live cuts from the era. These numbers find Camel continuing to lean toward the lengthy instrumental type of song, but that’s an approach that portrays them in the best possible light. “Spirit of the Water” still displays a progressive take on the Allmans.

By the third disc, Camel’s commercial high water mark (in the form of the 1977 LP Rain Dances and its follow-up Breathless) is represented. By this stage in the game, former Caravan member Richard Sinclair makes his presence felt, even though he contributes little in the way of song composition. Contributions from heavy hitters Mel Collins (reeds) and Brian Eno (textures) only add to the fascinating mix. Here the group has reached its apex of combining progressive rock sounds with accessibility. A live take of “Metrognome” — featuring Sinclair’s vocals — suggests an intriguing hybrid of Caravan and 10cc. “Echoes” (no relation to Pink Floyd) and “Starlight Ride” from Breathless are pop tunes — in the best sense of that phrase — with progressive rock textures.

The fourth disc attempts to to wrap things up as Camel’s sound mutated toward something of an Alan Parsons Project clone; one could argue that the addition of APP and Pilot members Ian Bairnston and David Paton made the shift inevitable. Thing is, before they joined, Camel’s lineup expanded to include Mel Collins (King Crimson) and Jan Schelhaas (another Caravan refugee). Including tracks from the concept album Nude (and live versions of some of those songs), the disc is interesting in a different way from the earlier material. Concentrating even more on atmospherics and instrumentals, the songs do betray some of the trappings of the era. Things like Vocoder-treated vocals and disco beats (all present on a live version of “Summer Lightning”) threaten to make the disc less vital — something that happens around the 1978-81 point in many career-spanning collections — but the sturdiness of the compositions and arrangements keep things interesting, if slightly dated.

Five studio tracks from 1981’s The Single Factor display Camel’s blatant (last-ditch?) bid for radio acceptance; here they again sound a lot — a lot — like Parsons’ collective — but again the tunes aren’t without their charms. As always, Andrew Latimer’s guitar leads and a wide array of keyboard textures (courtesy of Peter Bardens, Francis Monkman and a surprisingly long list of others) save things from mediocrity. Across these tracks, Camel produces interesting work, but veer close to losing their identity in the process. They sound a good bit like Monkman’s concurrent group, fellow pop-proggers Sky. And the facelessness continues, though when they sounds like others, at least it’s quality others: “Selva” sounds like a David Gilmour solo outtake.

The brief “Heart’s Desire” aims for a Parisian café vibe; though it hits that target well, one is left wondering why. That track segues into “End Peace” which is eerily reminiscent of “Don’t Let it Show” from Alan Parsons Project’s I Robot.

With 1984’s Stationary Traveler, Camel attempted to reassert themselves as a conceptual progressive-oriented band. The second half of the compilation’s fourth disc covers this period, again with a sampling of both live and studio tracks. Arpeggiated synthesizer lines and gated-reverb drums form the basis of “Cloak and Dagger Man,” which — while not a bad tune at all — could have been any number of bands from the era. Little of the prog aesthetic is evident here; the song sounds as much like Duran Duran as it does Asia. Tellingly, the disc concludes with live performances dating from the tail-end of the surveyed period, but the songs themselves are from The Snow Goose.

Taken as a whole, the compilation does an admirable job of showing the various sides of Camel. A judicious selection of live and studio cuts, single-oriented tracks and deep album numbers paint an accurate and fascinating portrait of the oft-overlooked band. While not as timeless as some of their contemporaries, Camel produced a body of work well worth investigation by those who enjoy the melodic, slightly softer end of progressive rock. Think of Camel as Pink Floyd without the angst and lyrical aspirations, Moody Blues with grander arrangement designs, a less-daring Caravan with slightly fewer jazz leanings. For the uninitiated, Rainbow’s End: An Anthology 1973-1985 is a worthy entry point into the world of Camel.