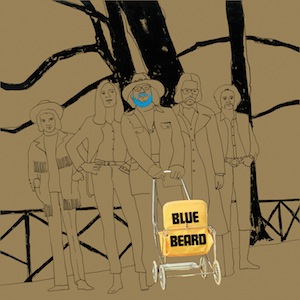 Way back in 1971 a self-titled album was released by a group calling itself Blue Beard. Recorded and released (only) in Italy, the disc went on to become a collectors’ item. Fantastic Voyage ended up with the rights to the masters, and has re-released the album on vinyl only.

Then as now, Blue Beard was something of a mystery. An aggregation comprised of musicians from all over, the studio-only project included players from Holland, India, Ireland, Indonesia and Australia. Nope, no Italians. In fact the project was put together specifically to record a clutch of songs by a pair of composers, Thurman Binkley and Bob Welch.

Next to nothing is known about the musicians on the disc, beyond their names. And nobody seems to know much about Binkley, other than that he would later be involved with a French film soundtrack. Welch, of course, would go on to some fame as a member of Fleetwood Mac, just prior to their transformation into the vapid and overrated 70s pop juggernaut. (They still rocked when Welch was with ’em, though.)

The music on Blue Beard covers a wide variety of styles. The single “Sly Willy” is a good tune marred by a grating descending-whoop that runs throughout the whole song (intentionally so). Several of the other songs tread in (of all things) a sort of Southern soul-pop style a bit like late-late period Paul Revere and the Raiders, Glen Campbell or Mac Davis. “Too Many People” is vaguely reminiscent of Rare Earth crossed with Three Dog Night; that sort of commercially-minded-yet-kinda-rocking vibe pervades the record.

The various styles attempted are all successful on some level (to varying degrees), but the net effect is lacking in a specific identity. This sort of thing is common to one-off studio projects: a real band made of players who have put in time playing together before entering the studio will develop a sort of musical simpatico, and that can’t easily be captured by studio cats.

A few tracks on Blue Beard break out of the soul-pop mold, and end up sounding like the kind of thing one might hear on compilations like The Great British Psychedelic Trip, (which, while often great and always British, wasn’t consistently psychedelic). The playing is workmanlike, and the arrangements occasionally head ever-so-slightly toward progressive rock, but there are ultimately no undiscovered gems here; there’s nothing on the level of Andromeda, The Open Mind or Locomotive (to name three obscurities of the era). There’s nothing especially distinctive here, but neither is there anything god-awful.

The musically-by-the-numbers “Goofin’ is Good Fun” has a funky/jaunty vibe that again evokes Country Wine-era Raiders. And while that reference elicits blank stares from most rock fans, so too does any mention of Blue Beard. “Butter Queen” attempts a style familiar to fans of Savoy Brown and Foghat, but tries to leaven the recipe with a slightly clumsy prog vibe. The result isn’t nearly the disaster that might suggest, but neither is it very memorable; there’s a good hook but a very weak chorus. And the singer — while competent — is no Mark Lindsay.

The best track on Blue Beard is the last, “Losing You.” A successful stab at progressive rock, the track merited inclusion in Fantastic Voyage’s Summer Turns to Autumn compilation. But anyone hearing it in that context — and subsequently turning to this album for more of the same — will come away disappointed.

Ultimately, Blue Beard sounds like what it is: good songs played by good musicians. Not great, though: the proceedings come off a bit rushed, slightly half-baked. There are better obscure early 70s rock albums out there waiting to be discovered. This one’s worth a listen, but for most collectors, it won’t be put into heavy rotation.