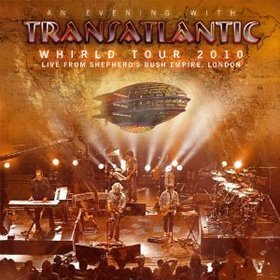 This one’s a frustratingly mixed bag. If you don’t know — and I didn’t until recently — Transatlantic is something of a modern-day prog rock supergroup, with several highly-esteemed players doing the ongoing side-project thing. On drums (and vocals!) is Mike Portnoy, showing that his expertly nimble and expressive playing works well (better, actually) outside the metallic confines of Dream Theater. On guitar is Roine Stolt from Flower Kings, and bass duties are handled by Pete Trewavas from Marillion. Multi-instrumentalist Daniel Gildenlow (of Pain of Salvation) leaps from guitar to keyboard to percussion and back in animated fashion. The band creates epic-length suites full of innovative playing and highly melodic song construction. All good, right?

Well, that depends on one’s point of view. The band is fronted by Neal Morse on lead vocals and keyboards. Morse is a gifted composer, a fine and expressive keyboardist and an able (if hopelessly square looking) vocalist and frontman. But here’s the thing: Morse left his original group Spock’s Beard. Why did he leave, you may well ask. Drug issues? No. Morse left to pursue a musical direction more in line with his religious convictions.

And there you have it. Though it must be said that Transatlantic’s religious themes don’t knock the listener over the head, they’re a central focal point of the songs. The born-again Morse — with his vaguely pedestrian demeanor and megachurch TV preacher vocal mic headset — imbues the whole proceeding with a vaguely evangelical air.

But then this is progressive rock. So there’s plenty going on musically, and listeners can easily focus on the music and let the lyrics (about the Master’s house and the prodigal whatever) drift by. The playing is excellent, and while Morse is clearly the front guy, everybody gets their turn in the spotlight. One of few cringeworthy moments comes when Morse tries to “rock the house” (it must be seen to be believed).

The group is captured in a supremely well-filmed date in Shepherd’s Bush (London) on their recent tour. The set exists in a variety of formats; the one submitted for review was a single DVD. That disc runs two and a half hours(!) and features four(!) songs. That last sentence right there tells you a good 80% of what you need to know about Transatlantic, and in the end it means more than any quibbling about lyrical subject matter. The songs are meandering (in a good way), multi-section suites that explore a good deal of musical territory, and do so in a memorable fashion. Shades of early Genesis (1970s), Marillion (1980s) and Spock’s Beard (now-ish) can be found throughout the sprawling compositions. And those are good things: this is prog of the symphonic variety, but it’s not dated nor backward-looking in its execution. Lengthy, interesting solos abound.

And to be fair, the lyrics aren’t especially heavy-handed. Moralistic and a bit pretentious? Sure. But listen to any of Richard Palmer-James‘ wordsmithing for King Crimson (not to mention Pete Sinfield‘s work) and tell me those aren’t obscure. One need not identify closely with what’s being sung about to extract great joy from the music. And as prog goes, what Transatlantic offers is pretty compelling stuff. So enjoy, and peace be with you.