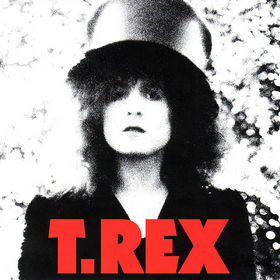 T. Rex was really two distinct groups in succession. The first — actually called Tyrannosaurus Rex — was Marc Bolan, ex John’s Children of The Legendary Orgasm Album infamy — plus Steve “Peregrine” Took on bongos and whatnot. Their hippy-dippy indulgences were sort of Donovan-on-heavier-drugs. But by 1971 Bolan had seen the light, and that light was more straight-ahead glam rock. Influenced by the UK scene spearheaded by David Bowie, Sweet and their ilk, Bolan maintained some of his former sound but polished it, moving in a rockier direction. In 1971 Electric Warrior gave the world the massive hit “Bang a Gong (Get it On)” and from there T. Rex’s new path was clear.

That album and 1972’s The Slider are arguably the apex of the group’s work, and of the genre in total. Fat Possum Records is the latest of many, many labels to license the album for reissue. So, here in 2010, we find another reissue of The Slider.

The arrangements are spare and no-nonsense, built around Bolan’s electric guitar plus the rhythm section of Steve Currie (bass) and Bill Legend (drums). Mickey Finn (responsible for the prime 60s psych raveup nugget “Garden of My Mind”)* provides congas and vocals, providing the link to the earlier Tyrannosaurus Rex sound. Flo and Eddie of the Turtles return to provide their own brand of vocal magic that worked so well on “Bang a Gong (Get it On)”. The string arrangements will feel warmly familiar to fans of the era: Tony Visconti handles production and arranging. Visconti’s presence gives the record a sound and feel quite similar to Bowie’s Ziggy Stardust, another Visconti production released within months of The Slider. But T. Rex’s record doesn’t shoot for the epic storytelling and mythmaking for which Bowie aimed.

The lyrics are impressionistic, which a kind way of saying they don’t make a helluva lotta sense. It’s amusing to think that Bolan was taken relatively seriously when writing stuff like “Telegram Sam, you’re my main man / Golden Nose Slim, I know’s where you been” and “Buick Mackane will you be my girl” while meanwhile Sweet was being slagged by the critics for singing their ChinniChap lyrics like “Wig Wam Bam.” It’s all pretty damn silly, yet giddily wonderful. And it’s evocative of a genre that lashed back at the concurrent rise of navel-gazing singer/songwriters. Thank goodness.

Every song on The Slider sounds like it could have been a hit, but in fact “Telegram Sam” only hit #67 on the singles chart. For a lyrically lightweight record, it did quite well on the album charts, reaching #17 in the year of its release. “Baby Strange” would find new life many years later when Alex Chilton performed it with the re-formed Big Star (he had actually covered the song onstage with the original Big Star, but hardly anyone knew or cared in those days).

An excellent Mark Paytress essay helps put The Slider into context, and provides one of the prime reasons to purchase this package rather than earlier ones. (Unlike some earlier reissues, there are no bonus tracks, but the booklet and digipak are very nice.)

* Wrong. I assumed a connection where none existed. Drummer Mickey Finn was not a member of the group The Mickey Finn.