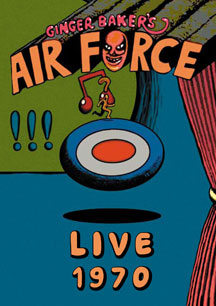 I must admit I was thrilled and filled with anticipation when I recently learned of this DVD’s existence. Ginger Baker — then late of Blind Faith, and before that Cream — put together a groundbreaking supergroup in the waning days of the 1960s. While Ginger Baker’s Airforce is most often thought of — when it’s thought of it at all — as some sort of one-off failed vanity project that quickly ended up in cut-out bins, the reality is quite different.

The group was never designed to have a set lineup of personnel. Players came and went. The first lineup included Steve Winwood, who had just finished playing with Baker in Blind Faith (another act that rarely gets its due). Ric Grech from Blind Faith had also briefly been a member, as had Chris Wood (previously and soon again Winwood’s bandmate in Traffic). Denny Laine (previously of the “Go Now” era Moody Blues, then his own tantalizingly brief String Band, and soon to join Wings) enlisted in the Airforce as well. Even former Move guitarist Trevor Burton passed through the ranks of Ginger Baker’s Airforce.

Okay, enough with a rundown of who is not on this new video. A few facts remain: one, the existence of any Airforce video is a rare and special treat. Since the group only did a handful of shows, there were precious few opportunities to capture them on film. Two, the lineup that appeared on the German TV program Beat Club was quite amazing in and of itself. Built around a core of Baker on drums plus his mentor Graham Bond on saxes (leading a brass section), the group also featured some fiery guitar work from Ken Craddock (who doubled on organ).

The original broadcast was, by necessity, edited for television: you always shoot more than you’ll need. This 51-minute DVD includes all extant tape from the session, including slate claps and a bit of between-song banter between the players and the studio crew. So viewers are treated to two versions of “Sunshine of Your Love.” But wait: you have never heard the song like this. Featuring the dual lead vocals of Aliki Ashman and Diane Stewart (Bond’s wife) plus a boundary-stretching horn section, the song as performed by the Airforce pushes the limits of what listeners could reasonably expect.

If Ginger Baker’s Airforce sounds like any other group, it’s got to be Colosseum. But that jazz-rock group never had African percussion worked into the mix. Ghanan percussionist Speedy Acquaye added a world-beat sensibility to the Airforce sound; a strong case can be made that Ginger Baker really spearheaded the world music movement. There’s no denying that he was ahead of his time in the integration of western and African musical styles. The Airforce experience had a profound effect on his own musical direction: he would soon move to Lagos, Nigeria. But that’s another story.

The performances on Live 1970 are amazing. The sound is superb, and the visual quality is stunning for a TV film from forty years ago, especially one most people didn’t know still existed. The songs go on and on — the opening number (three songs in succession, really) runs nearly 22 minutes — but they never get boring. Hypnotic, yes. A highlight of the set (one of many) is “12 Gates of the City” (from the second Airforce LP) featuring Bond on lead vocals. “Early in the Morning” is the only song performed that had appeared on the first album; there the lead vocal duties were Steve Winwood’s. Here it’s Ashman and Stewart, giving the song a wholly different flavor.

Don’t be misled when you see the cover art: it may lead you to think that Live 1970 is a video document of the first album, itself a live performance at London’s Albert Hall. It is not that: as I’ve pointed out, neither the song list nor the band lineup shares much with that show. But it’s still quite essential. Fans of any of Baker’s work will enjoy this: Baker is shown playing with what could almost be termed subtlety, even though he still bashes the hell out of the well-worn skins. Anyone curious about the earliest examples of musical genre cross-fertilization and hybridization will benefit from a viewing of Live 1970. Jazz fans who dig loose playing will enjoy this, too. In short, anyone with a musically open mind should give Ginger Baker’s Airforce – Live 1970 a look.