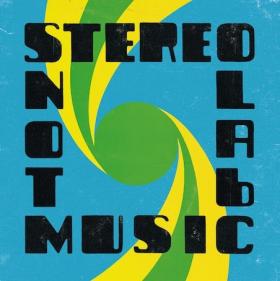 Call it deceptive — or at least misleading — labeling. With a title like Not Music, the uninitiated might be led to believe that this latest collection from Stereolab is some sort of atonal excursion in to the world of analog synthesizer. Not that would be a bad thing, you understand. But Not Music is as far from that as imaginable.

The band announced its indefinite hiatus in 2009, so the appearance of an album — any album at all — is something of a surprise. But then Stereolab has always leaned in the direction of unpredictability. As the press kit for this new disc explains, Not Music is “part of Tim Gane‘s 2007 science experiment involving improvised chord sequences played on piano or vibraphone…” That too may conjure visions of less-than-hooky compositions.

But again that image would be inaccurate. The tracks on Not Music are impossibly catchy. The disc is full of ear-catching melodies, infectious beats, lovely arrangements. “Supah Jalanto” sounds like postmodern Bacharach/David. If Pizzicato Five sang in standard English and dispensed with the sampling, they’d sound a bit like Stereolab on Not Music. Or, if Ivy rocked harder (though Sterolab doesn’t exactly rock, mind you).

The seemingly more-head-than-heart approach to composition actually created some emotionally heartfelt-feeling music. Sonically in the same ballpark as Brian Eno‘s commercial pop trilogy of the 70s, Not Music is nowhere as weird (or, it must be said, groundbreaking) as Another Green World. But the group does manage to create memorable music.

The (real) brass charts on “So is Cardboard Clouds” are fairly beefy for a band so immersed in keyboard culture. But for fans of said keyboard culture, there are plenty of great sounds, courtesy of such familiar brands as Moog, Farfisa and the legendary VCS3 (immortalized on Pink Floyd‘s Dark Side of the Moon). Latetia Sadier‘s icy yet emotive vocals float above the melodies. Except on the instrumental numbers of course. There are several of those here.

If dancing is your thing, “Silver Sands” might belong on your playlist. Here Sadier evokes the original ice queen Nico while an insistent, floor-shaking beat (with tasty Moog bass) pushes things forward. And if I didn’t warn you, you would not expect the drum solo. And there’s some welcome guitar jangle (and off-kilter beats) on the wonderful “Sun Demon.” The disc wraps up with “Neon Beanbag,” a one-chord trance freakout remix courtesy of Atlas Sound. Fans of Apples in Stereo and Air (and of course fans of Stereolab’s dozen previous records) are sure to enjoy some well-spent time with Not Music. Influences are pulled from many places — most of them non-rock — yet they coalesce into something that is clearly the work of a band with a vision.

In spite of what could be a limiting formula for creating songs, there’s a pleasant (dizzying, actually) amount of variety across the thirteen tracks on Not Music. Good thing, that. Because Stereolab’s hiatus is a real thing: the press kit makes it clear that “there will be no touring in the foreseeable future” from the group. But in the absence of live dates, Stereolab has delivered a lovely bouquet of melodies that should satisfy fans of their particular brand of pop music.