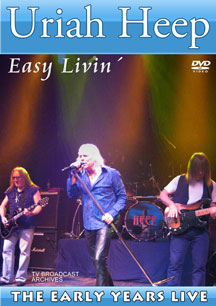 Look, you’re gonna love this one or you’re gonna hate it. And honestly you don’t need to read a review it to know which (but thank you anyway!). Uriah Heep is one of those bands that some love to hate. Me, I love ’em.

In the early 1980s Spinal Tap deftly skewered the whole heavy metal (in its original form) scene. But it’s worth noting that one cannot successfully parody something if not possessed of a clear and full understanding of it. If you have anything less that a deep appreciation for a thing, attempts to parody it will come off as mean-spirited.

Essentially, if you’ve seen the live footage of Spinal Tap, you’ve seen most everything Uriah Heep will show you in Easy Livin’: the Early Years Live, a brief compilation of two made-for-TV concert bits. Every heavy rock trope of the 70s is present: close-up mugging for the camera, mic stand twirling, flashy jackets, drumstick twiddling, rock star poses, laying-of-hands upon front-row concertgoers. You name it, it’s here in spades. But if you actually like Uriah Heep, well then all that’s part and parcel of what you came for.

The band is in fine form in these clips. By ’74 Uriah Heep were on the latter end of their commercial and creative apex, but still firing on all cylinders. The band’s revolving-door lineup still delivered the goods. (Clichés? Yes. Somehow I thought it appropriate under the circumstances.) “Stealin'” from the band’s 1973 LP Sweet Freedom gets heard and seen twice, as does the immortal “Easy Livin'”. And both are enjoyable. But perhaps the highlight of the DVD is “Return to Fantasy” with its over-the-top Moog riff (are there other kinds? Not in the mid 70s, there weren’t). Distorted Hammond was always a centerpiece of the Heep sound, and it’s in full flower here. David Byron emotes in his inimitable Byronic-hero way, even indulging in a spoken-word midsection.

Harmonies are tight throughout; no mean feat when you’re busy playing heavy riffs and wagging your tongue at the camera. Say what you will, but the band is working hard for their money. The falsetto harmonies on “Easy Livin'” are not easy to pull off live (I know this firsthand, which says all you need to know about where I stand Heepwise) but they do well in both performances; the slight edge goes to the second, filmed in the USA.

That said, performance aside, this package couldn’t offer less if it tried. There are no liner notes; the only way to know that these two performances are from Shepperton Studios (1974) and Don Kirshner’s Rock Concert (1975) is to watch the 40-minute DVD (or read this review). No credits, no bonus material, no nuthin’ beyond the grainy dubs of these two performances. A bit of post-production seems to have been applied: those slo-mo shots employed repeatedly through the disc suggest some early ’80s fiddling. But then there’s the late-60s posterization technique applied (naturally) during an organ solo. Those are just for nostalgia, one guesses. And inexplicably, the cover photo looks to be the current band. Some old guys. Thankfully the DVD itself is the real deal from the band’s heyday. And of course there’s the issue of the title, which also betrays the compilers’ ignorance about the band: The Early Years? I think not: Uriah Heep’s debut LP hit the shelves in 1970, and their peak record (1972’s Demons and Wizards) came out in 1972.

So how’s the quality of the DVD itself, you might ask. Audio wise it’s fine; there seems to be a little bit of stereo separation, but not much. The performances are pro-shot, but the DVD is most definitely not sourced from master tapes. It’s of that nth-generation variety so familiar to collectors. Watchable, yes. Sharp and clear, um, no.

Look, it’s cheap. And it’s Heep. Together those are reasons enough to either despise it or run right out and purchase it. Like some other great things in life, it’s loads of fun and over too soon. So whether you consider it a simple pleasure or a guilty pleasure, it’s fun enough to warrant 40 minutes out of your life. Because it’s rare: as David Byron might have put it, “This is a thing you’ve never seen before, and it’s Easy Livin.’” So go ahead and let this DVD take its place in your heart.

P.S. Bonus points to you if you recognize the bass player working for a paycheck in the 1975 clips. He could play those riffs with one hand tied behind his back, I’ll bet.