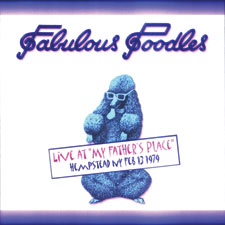 “Well, fame at last! Shave my beard and call me normal!” exclaimed Tony de Meur, in 2005 upon learning of the existence of these two radio broadcast recordings of The Fabulous Poodles.

The Fabulous Poodles were never what one would classify as “normal.” Coming on full-throttle in those heady days of new wave, they combined the best elements of pub rock, cleverness and a Kinks fixation. The British foursome sounded a good bit like the Kinks, in fact, but only if you could re-imagine Dave Davies playing violin and mandolin instead of guitar. Leader Tony de Meur was in fact a vocal doppelganger for Ray Davies, and the lyrical witticisms seemed to further the connection. Had they held on into 1980, MTV could have broken them into the majors.

Obsessive rock archivists have preserved these two shows, from consecutive nights in 1979. Both nights found the band facing pressures that would have made lesser musicians fold: a few nights earlier in Boston, the group’s equipment and clothing was stolen. These nights they performed on borrowed, unfamiliar equipment.

It may have frustrated the band (as between-song comments by de Meur indicate) but it didn’t affect the music. If anything the band charged forth with a renewed ferocity as they tore through “Suicide Bridge,” “Tit Photographer Blues” and the hit “Mirror Star.” For added value, the group acceded to requests for the Kinks’ “You Really Got Me,” and even an a cappella rendition of Vera Lynn‘s 1942 hit “Well Meet Again”.

By the early 80s the legit Fabulous Poodles albums were out of print, and a spotty 1995 CD compilation of selected tracks remains difficult to locate. [Luckily, two of their stateside LPs were issued on CD in 2009; they’re reviewed here.] But the two New York shows from the group’s brief heyday remain, a testament to the power and wittiness of cult sensation The Fabulous Poodles.