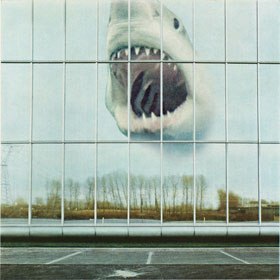 “It’s always been in our nature to be somewhat contrary,” chuckles Joshua Wells, drummer for Vancouver-based Black Mountain. The band has always had an interest in “taking things in a different direction. I don’t think there’s any point in making the same record twice, right?”

The quintet’s self-titled debut came out in 2005, followed by the hit (#13 on Billboard‘s Top Indie Albums chart) In the Future in 2008. Their newest album, Wilderness Heart, was released a few weeks ago. The group’s sound is a synthesis of modern and traditional; the band has often been compared to Black Sabbath, but Led Zeppelin‘s fourth (Untitled) album — especially “The Battle of Evermore” — is perhaps a more apt touchstone.

Wells explains one of the keys to getting the album to sound how it does: “It was recorded just like you’d record an album in 1972: on tape, in a nice old studio with old gear.” But unlike 2008’s In the Future, with its epic-length (16:37) track “Bright Lights,” Wilderness Heart is a collection of ten songs, only two of which break the five-minute mark. “The songs essentially dictate the direction a record’s going to go,” Wells observes. “This time, we tried to focus the arrangements and tighten the songs up in a way that made them briefer, more concise statements.” Wells concedes that Wilderness Heart is perhaps a bit less “murky and introverted” than its predecessor.

The well-known lick from Led Zeppelin’s “Kashmir” makes an appearance in Black Mountain’s “The Hair Song.” And some of the band’s sounds would fit in well on an album by Uriah Heep or Deep Purple. “There are nods to some of those sounds that have always turned us on,” Wells concedes, “because those are the things we like about rock’n’roll. But we work pretty hard to make a record sonically interesting so that it bears repeated listening.”

In the studio, Black Mountain turns to vintage instruments to sculpt their recordings. Wells says that old amps, pedals and things like “real Hammond organs and old drums” are a key ingredient in the band’s trademark swirl of sound. But onstage, sometimes that’s not practical. For example, “We’re not at the level where we could — or should — be traveling with a Mellotron,” Wells admits, “so we use a digital version of one.” 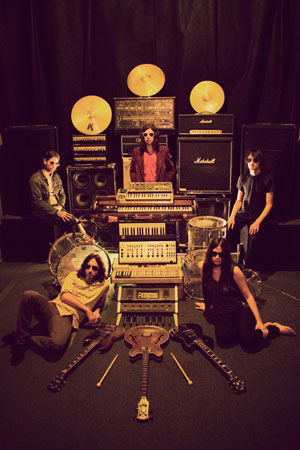 The dual male/female lead vocal approach has a long and proud tradition within the psychedelic and heavier end of the rock spectrum. Bands like Jefferson Airplane, It’s a Beautiful Day and HP Lovecraft all made effective and distinctive use of the unique sound of that vocal blend. Black Mountain’s StephenMcBean and Amber Webber follow that tradition, but neither claims much influence from those artists. “Amber has been compared to Grace Slick a lot,” Wells says, “but she’s not really a fan. So I don’t know where that comes from. She finds it flattering, though.”

The band’s harmonies don’t always go in the most obvious direction (Wells describes it as “non-typical vocal interplay”). On a track like “Buried by the Blues” Webber’s vocal weaves in and out of the main melody, drawing and intriguing line atop the band’s instrumentation. “Steve writes the melody and the lyrics, for the most part,” Wells explains. “And then Amber takes that home and works her ass off to come up with her own unique vocal parts.”

There’s plenty of heavy rock — and plenty of folk-rock, really — on Wilderness Heart. But the band takes a stylistic detour on “Let Spirits Ride.” The song has more in common with the Dead Boys‘ 1977 punk single “Sonic Reducer” than anything from Black Sabbath. Wells says that the song’s riff “came up in jamming” but that the song developed over time. He laughs and recalls that at some point one of the band observed, “We don’t have any fast songs!” They tried “Let Spirits Ride” that way, and it worked. “We quite like it,” he says. “It’s fun to play live.”

Black Mountain is part of a proud 21st century tradition of bands unafraid to look backwards for some of their stylistic cues. Wolfmother and Bigelf — to say nothing of the current soul revival — draw inspiration from genres once thought moribund. But Wells agrees that there’s still a lot left to say via those idioms. “We naturally gravitate toward these sounds,” Wells says, “but we really try to avoid falling into the homage, cliché thing. Just as repugnant as making ‘modern rock’ is creating some sort of cartoon of 70s rock.”

“We’re not pretending that we’re living in the 70s,” Wells says. “We’re well aware that we’re making modern music, but using the ‘palette’ of some other era. And the reason we’re doing that, mind you, is that I don’t believe that the rock’n’roll palette ever got much better than that.”

An edited version of this feature appeared in the November 3, 2010 print edition of Mountain Xpress.