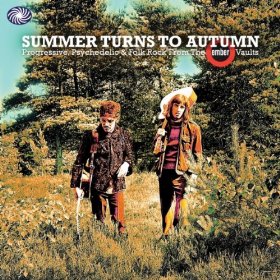 Fantastic Voyage has the rights to the catalog of 1960s UK indie label Amber, and is deep into reissuing that material across a wide array of albums. Some of these are single-artist sets; many more are thematic compilations. Summer Turns to Autumn is a followup to Looking Towards the Sky; both are (ostensibly) aimed at collecting rare progressive, psychedelic and folk-rock sounds.

Things get off to a fine start with Blonde on Blonde’s “Castles in the Sky.” The song is a highlight of the band’s consistently impressive output, and is reviewed here. Two additional Blonde on Blonde songs were compiled on the Looking Towards the Sky set.

The Dorians were also comped on that 2010 set; their song on this compilation is “Means and Ways.” Wah-wah guitars are applied to a vaguely proto-Northern Soul arrangement. The lead singer’s vocal acrobatics are a bit on the grating side, but the song is appealing nonetheless.

Speaking of odd vocals, Knocker Jungle — represented on this set by three numbers — has a singer who, well, doesn’t sound British. “Not Even a Letter” features a spare, acoustic guitar-led arrangement with what sounds like a pennywhistle trilling along. A heavy bass line pulls things back into the rock end of the folk-rock idiom. The band changes up the tempo for the song’s coda; it’s an intriguing — albeit insufficiently explored — excursion.

The odd vocal bits continue with “Summer Days” from 9:30 Fly. A needles-in-the-red electric piano plays an insistent riff that listeners will find either hypnotic or annoying. That extended (too long, really) intro gives way to a funky freakout that bears little musical relation to the intro. It, too, goes on far too long. And another repetitive riff is laid atop the arrangement. The song could have benefited from some judicious editing. And mixing, too: here’s betting that the keyboard player paid for the session. A slightly off-key female harmony helps keep the listener’s back-of-the-neck hairs standing at attention. Overall, the song has a few good ideas, a couple bad ones; in the end it’s a missed opportunity.

The ultra-rare self-titled album by the mysterious Blue Beard is represented here by two songs, the first of which is “Sly Willy.” (The whole Blue Beard album is slated for review here soon.) Starting out like some Hendrixian piece, the tracks heads into an arrangement that’s some odd hybrid of southern soul-pop a la late-period Raiders coupled with, say, early Deep Purple. For reasons unknown, a goofy descending vocal whoop is repeated ad infintum. A tasty guitar solo does appear here — the first on the disc so far — so that’s something.

That slick soul-country-pop sound — the kind one would see on any number of early 70s variety TV shows in the USA — is represented by Polly Niles’ “East Virginia.” But vibes and Niles’ vocal delivery lean the song ever-so-slightly (but not much, mind you) in a Julie Driscoll direction. The song itself sounds like a cross between a folk traditional ballad and Fred Neil’s oft-covered “Wayfaring Stranger.” Slick string charts give the song unmistakable MOR appeal.

Blonde on Blonde’s “November” is a highlight of this disc. In fact, it’s a fair bet that if a track on this set is by Blonde on Blonde, it’ll be qualitywise a few notches above the rest of the songs. The distant-sounding lead guitar has a fantastic tone, and the subtle instrumental flourishes throughout the song are all worthwhile.

But then here comes Knocker Jungle again. On “Oh to Be Free,” it’s hootenanny time. Actually the tune sounds like the weakest numbers off of Traffic’s self-titled album, but without the redeeming presence of Steve Winwood’s voice. Here the singer not only sings in his less-than-appealing voice, but he’s established what can only be called an open relationship with pitch and melody. And the song is a case in point that there’s such a thing as overuse of the “doo-doo-doo” vocal ploy.

“God Save the World” from Blue Beard brings more of the soul-pop stylings. It’s not difficult to imagine this song being performed by Neil Diamond, Mac Davis or even David Clayton-Thomas. If those names make you cringe a bit, we’re on the same page. A bit too much vocal enunciation mars what’s not a wholly unpleasant romp. But like too many of the tunes on Summer Turns to Autumn, here the rock turns to MOR.

9:30 Fly more than redeem themselves with “September.” A folky romp that occupies that space between the Mamas and the Papas and Peter, Paul and Mary, “September” has a bright acoustic vibe that marks it as another highlight of this collection. You might even find yourself clapping along.

The Dorians aren’t a one-trick act either: The intro to “Torch Song” sounds nothing like their earlier track. Elements of British prog, soul and pop are all woven into the track. Sleigh bells provide an early hint that the song is somehow Christmas-themed.

The Back Street Band’s “Daybreak” is a not-too-distant cousin of Cream’s Politician,” right down to the snaky riff and the forceful Jack Bruce-styled vocals. If you’re a fan of Cream’s studio side, you’ll find plenty to like in this track. There’s also a sonic similarity to some of Jethro Tull’s work (without Ian Anderson’s flute, of course). Dueling guitars fight through the outro. More like this, please.

Knocker Jungle comes back for more on “Where I Belong.” Get past the vocals — which are dialed back here a bit — and you’re left with a fetching folk-rock number. The song would benefit from a bit more instrumentation, but pastoral simplicity seems to have been the métier of this duo.

“I Don’t Care” from Blonde on Blonde is a surprise. Here the versatile band trades in a sound and style more closely associated with Foghat or Thin Lizzy. Proto-boogie, you might call it. With lyrics cribbed loosely from The Nightcrawlers’ “Little Black Egg” (really!) the song rocks. A stinging guitar solo comes in halfway, but then you knew it would. Twin guitar leads rock out, big-time. It seems highly likely Phil Lynott heard this song as young musician. This is an essential track, and it’s not on the reissue of Rebirth (reviewed here).

Milt Matthews Inc. has also been represented by a Fantastic Voyage reissue (review here), and that group’s fine cover of Blind Faith’s  “Presence of the Lord” is collected on this set as well. Comparisons to Clapton are somewhat pointless, but let’s just establish that Matthews (an African American) understands the song’s gospel core and mines it well in his version. The wah-wah solo is a nice touch, and it’s redolent of Clapton’s friend Duane Allman.

There’s evidence of Steve Winwood’s involvement on Paddy Maguire’s “Lay Me Down,” the track that wraps up this set. Imagine country-soul plus saxophone sung by a guy from the British Isles, but clear your mind of any Van Morrison notions. What you’re left with is Paddy Maguire. If you can get past hackneyed sentiments like “lay me down by that old railroad track” and avoid wincing when you hear a white guy from across the pond complain about having been enslaved, you can enjoy a song that has a Music From Big Pink vibe.

In summary, Summer Turns to Autumn is more of a mixed bag, more of a hit-and-miss affair than its predecessor, but does contain a handful of rare, must-have gems.