“I’m a toolmaker; I’m not a musician.” With trademark modesty, so said Bob Moog, the man who–for all intents and purposes–invented the modern synthesizer.

I sat down recently at an Asheville NC coffee shop with his daughter Michelle Moog-Koussa to discuss the work of the Bob Moog Foundation. As Louis Armstrong‘s “Wonderful World” played softly in the background, the Foundation’s Executive Director told me how the organization got its start not long before Bob Moog (rhymes with “vogue”) succumbed to brain cancer in 2005.

“The Foundation came about right before Dad passed away. My brother Matt had set up a [private] web page for him as a way to keep in touch with forty of his friends, to let them know how he was doing.” Someone leaked word of the site on a synthesizer chat group. She winces at the recollection. “My brother got very upset, and put up a password on the site. [But then] my dad said, ‘y’know what? Take the password down and let them come.’ I’m not sure I would have expected that, because he did really value his privacy.

“The day he died, there were 20,000 hits” on the site. “There were all these tributes to Dad, about how his instruments had affected their lives, how [Moog synthesizers] had given them a voice for their creativity.”

Michelle regaled me with stories of her dad: people “were bowled over that they would ask him a question–they’d muster up their guts to approach him–and he’d whip out a pen and a napkin and draw them a schematic!” 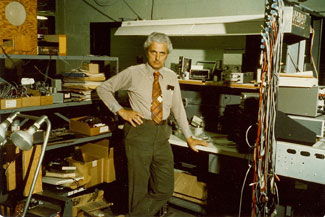 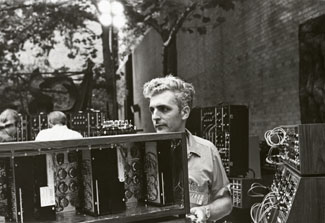