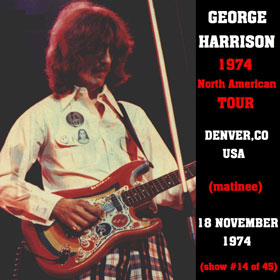 Popular legend among Beatles fans holds that George Harrison‘s 1974 North American tour was an unmitigated disaster. As the story goes, Harrison came down with a severe case of hepatitis (or, as he called it in some interviews, “hippie-titis”). As a result of the malady, he lost his voice. For many artists, that would have meant cancellation of the tour. But whatever his motivations, Harrison’s tour went on as scheduled. In fact, recording sessions also continued: one listen to his cover of “Bye Bye Love” on the Dark Horse LP (waggishly — but not without accuracy — dubbed Dark Hoarse by critics at the time) shows that indeed his voice was shot.

But the planned tour was something of a mega-event. In many ways a sort of scaled-down Concert for Bangladesh on the Road, the tour featured many of Harrison’s usual-suspects musical associates, and over the course of a show, several of them would get their own spotlight numbers. In a real sense George’s ’74 tour was a forerunner or Ringo‘s All-Starr tours that would begin many years later.

In addition to songs from Dark Horse, Living in the Material World and All Things Must Pass, the shows featured a few Billy Preston numbers (“Outa Space,” “Nothing from Nothing,”and “Will it Go Round in Circles,” all of which he’d actually do later with the All-Starrs), and “Tom Cat,” a number spotlighting horn player Tom Scott (L.A. Express). But the thing that made the tour so unusual — well, one of the things, but we’ll address at the others in a bit — was the integration of Ravi Shankar into the set.

In George’s mind, the concerts weren’t merely for him to promote Dark Horse; they were a means to bring eastern music of Ravi Shankar to audiences across the USA. Shankar’s then-current album Shankar Family and Friends featured a compelling and largely successful hybridization of Indian and rock styles. That album was reissued in 2010 as part of the Shankar/Harrison Collaborations box set, and is reviewed here.

The standout tracks from Shankar Family and Friends were part of the shows. “I Am Missing You” featured Lakshmi Shankar on vocals, and the album’s semi-instrumental “Dispute and Violence” was also performed mid-set. In addition to the rock lineup of two guitars, bass, keys, drums, percussion and horns, a complement of fifteen Indian musicians was employed. Audiences were thus exposed to a set that covered rock, Indian music and that slightly odd in-between hybrid.

In yet another unusual move, Harrison’s tour dates were structured so that in most cities there would be two concerts: a matinee and an evening show. Then as now that approach is fairly unusual for a rock artist. And as been documented elsewhere — and this is the quality for which the tour has gone down in history as controversial — Harrison was mildly perverse in his own song selection. On record, he had already made a bizarre, self-flagellating choice of covering “Bye Bye Love” on Dark Horse (featuring backing vocals by Eric Clapton and Pattie Harrison!). While he (thankfully) didn’t do that one onstage, what he did do approached sacrilege in the minds of Beatles fans.

“Something” was one of Harrison’s best Beatles-era songs, so it was reasonable to expect him to perform it onstage. But to change the lyrics to “something in the way she moves it” must have elicited a jaw-dropping response from the crowd. And hearing George croak the lyrics probably helped not a bit. But he wasn’t done. George and band covered John Lennon-penned Beatles song. Featuring an arrangement that owed more to Vanilla Fudge or Rotary Connection, George rasped his way through “In My Life.” Here, at one point, he changed John’s lyric to “In my life I love God more.” It’s cringeworthy, really: in 1974 few were looking for reinterpretations of Beatles songs. A soulful (what other kind would you expect?) organ from Billy Preston nearly redeems the song, but not quite.

Yet if one can look beyond those egregious (and frankly inexplicable) missteps, the tour had a lot to offer. And as it turns out, a number of the shows were recorded from the audience. (At least one was professionally recorded, but it’s unlikely ever to see legitimate release). The November 18 1974 matinee from the Denver Coliseum is one of the better of these. Certainly not perfect — the audio quality is exceptionally dodgy during Shankar’s first number “Zoom Zoom Zoom.”

Critics of the time panned the tour, and more than a few members of the audience would have preferred less Indian music, more rock and roll and (presumably) less taking of lyrical liberties. But even allowing for all of that, these shows are nowhere as bad as all that might suggest: the band — in its rock, Indian and hybrid forms — is mostly top-notch, and any opportunity to hear “What is Life” live should not be missed.