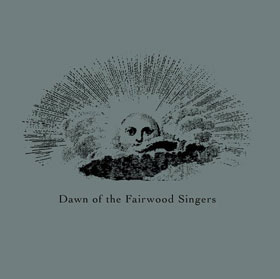 Allen Clapp is not British. But you’ll be forgiven for thinking he is when you listen to the new EP Dawn of the Fairwood Singers. The three-song release boasts a sound that evokes the breezy, pastoral sounds of late 60s and early 70s soft (but not lame!) rock.

The cover artwork offers an ideal shorthand for the music contained therein: a line drawing (or woodcut, or something like that) of a stylized sun is set against a moody, dark blue-grey background. The shimmering music inside is joyful and melancholy all at once. Clapp describes the project’s sound as “melancholic popsong,” and that just about nails it.

“September Sun” is short on lyrics, but certainly that’s Clapp’s intention; he’s a deft and expressive lyricist. The approach is more to deliver the lyrics in a hypnotic, mantra-like fashion, and the song is wholly effective at achieving that sort of vibe. The song builds from a simple arrangement into something more developed. There are hints of the Left Banke, the Association and even Alan Parsons Project, but — like Clapp’s main project the Orange Peels, the Fairwood Singers aren’t overly evocative of anyone else. Lovely piano figures and acoustic guitar are balanced with (relatively) grittier sounds of Mellotron and clanking snare drum. This one’s a dreamy, soft wad of ear candy.

“Weather Charts” is some sort of cross between Pilot and Third/Sister Lovers era Big Star, updated for the 21st century (and devoid of Alex Chilton-styled angst and confusion). Again piano and Mellotron are the central instruments; it’s an impossibly lovely melody. The vaguely sad and wistful arrangement has its sweetness leavened by subtle addition of just a bit of distorted guitar. The only thing wrong with the track is that it’s over too soon.

Even if the song wasn’t a thing of beauty, “I Thought I Heard the Answer in a Song” would score on the strength of its title alone. But no: the song boasts a yearning, expansive arrangement. Old-school production flourishes (like hard-panning of certain instruments) are evident on the song. The vocals — overdubbed an indeterminate number of time to glorious effect — are pushed way-forward in the mix. But it too — like the entire EP — ends long before the listener is done with it.

There’s a lonely place on the rock landscape: it’s that place occupied by sturdy, well-written, expertly-executed songs that don’t exactly rock. Allen Clapp’s Dawn of the Fairwood Singers makes a trip to that place a worthwhile excursion.